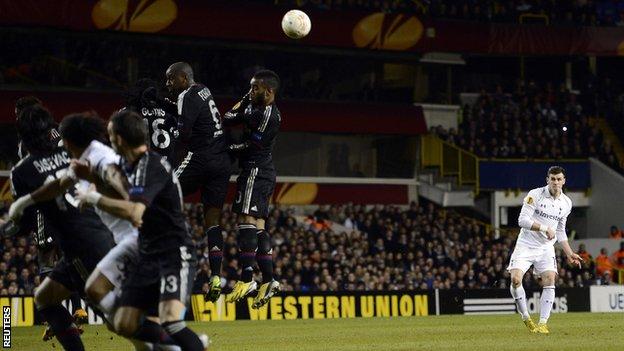 Gareth Bale scored with two free-kicks as Tottenham beat Lyon in a Europa League round of 32 first leg meeting full of stunning goals.

After previously missing an open goal, Bale brought White Hart Lane to its feet with a devilishly swerving 35-yard effort just before half-time.

Lyon's Samuel Umtiti replied with a technically perfect half-volley from the edge of the box to level the game.

But Bale struck again deep in injury-time to give Spurs a narrow advantage.

While this match contained three stunning strikes, the excitement levels paled into insignificance when compared to the 4-3 Uefa Cup Winners' Cup thriller between the sides at White Hart Lane in December 1967

In Lyon, Tottenham faced a club whose standards had declined since winning seven French league titles in a row in the previous decade, as well as making the Champions League semi-finals in 2010.

Despite the hosts making the brighter beginning, Lyon demanded a penalty when top scorer Bafetimbi Gomis went down in the box when Jan Vertonghen stuck out his leg. Contact between the pair seemed minimal at best, and last season's Champions League final referee Pedro Proenca declined to point to the spot.

Tottenham looked to use their superior pace all over the pitch to force the breakthrough and Emmanuel Adebayor, making his first start in more than a month after being away at the Africa Cup of Nations, should have put his side ahead when he snatched at a delightfully-weighted through-ball from Mousa Dembele.

Bale has been in lethal form of late, scoring Tottenham's last four goals, but he proved that even the greatest players are still fallible when he missed from well inside the visitors' area with the goal at his mercy following full-back Kyle Walker's burst down the right flank.

Bale's brace of free-kicks took him to 17 goals in all competitions this season, with four of his last six strikes coming from distance

Redemption was soon coming for the Welshman, though, as he brought the Tottenham support to their feet once more when his astonishing free-kick dipped past the helpless Remy Vercoutre.

It was a strike worthy of Lyon great Juninho Pernambucano, who has made a career on the back of such breathtaking long-range dead ball attempts.

Stung by conceding the opening goal, the French side improved after the break and levelled things up in majestic fashion. Left-back Umtiti raced onto William Gallas's clearance, leaving Friedel dumbfounded as he watched the 19-year-old's shot rocket into the top corner of the net.

Lyon have earned a reputation as a conveyor belt of talent thanks to the exploits of former players such as Michael Essien, Florent Malouda and Karim Benzema.

Judging by Thursday night's evidence, the production line seemed still to be in action as 21-year-old attacker Alexandre Lacazette almost grabbed an impressive strike of his own as he dribbled through four defenders at speed before shooting straight at Friedel.

Tottenham struggled to regain momentum after the equaliser and were not even boosted by the introduction of January signing Lewis Holtby from the bench.

And so Spurs again looked to Bale for inspiration. He did not disappoint, as deep into injury-time he hammered in another outstanding strike to gain his side a slim lead for next Thursday's second leg at Stade Gerland.