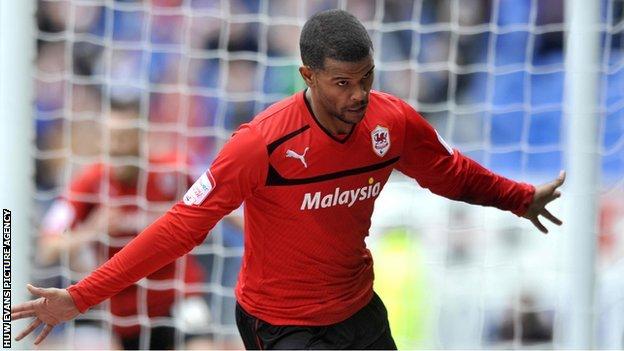 The once-capped England striker broke through moments before half-time to clip a rising shot into the top corner.

Late confusion in the home penalty area saw Ben Nugent put the ball into his own net but the hosts held on.

Victory in the Severn derby kept Cardiff eight points clear at the top of the table, although they have a game in hand on second-placed Hull City who beat Charlton at home on Saturday.

Bristol City had won three of their last four games under new manager Sean O'Driscoll but remain in relegation danger, three points from safety and facing another tough trip to promotion-chasing Crystal Palace on Tuesday.

The Robins were indebted to Heaton during a first half dominated by Cardiff, as the goalkeeper formed a sturdy last line of defence against his former employers.

Craig Noone was the first to warm Heaton's hands, outpacing Brendan Moloney before seeing his shot pushed away.

Cardiff's other Craig, Bellamy, was the next to threaten as the Wales striker unleashed a 35-yard free-kick that needed a touch from the flying Heaton to help over the crossbar.

Campbell, a £650,000 January capture from Sunderland, was also looking lively but Heaton again had to come to the Robins' rescue with a plunging stop.

The keeper could only palm the ball out into the path of Nugent, but the young defender shot the bouncing rebound over the bar.

Yet with the first half entering time added on, Heaton and the Robins' resistance was finally broken.

Campbell combined incisively with Tommy Smith before unleashing a shot off the outside of his right boot that went into the far left corner of the net.

Cardiff had a strong claim for a penalty waved away by referee Eddie Ilderton soon after the restart, when Campbell seemed to be tugged back by Liam Fontaine.

Kelly spotted David Marshall too far off his line and produced a 30-yard lob that had the Scotland stopper back-peddling furiously, before watching the ball sail just over the bar.

But Cardiff then doubled their lead when Campbell drifted off his markers to collect a long throw from Aron Gunnarsson, showing great control to bring the ball down and clip it past Heaton.

That was Campbell's third goal in three games for his new club, suggesting the 25-year-old's capture is the final piece that will see Malky Mackay's side seal promotion to the Premier League.

To their credit, Bristol City refused to let their heads drop and Marshall needed to make a smart save to prevent Steve Davies from finding the back of the net.

Campbell was replaced by Heidar Helguson with 18 minutes remaining and left the pitch to a rousing ovation from the majority of the 25,586 fans.

A late goal-mouth scramble at the Cardiff end saw the confusion end with Nugent nodding past his own keeper, but Cardiff rode out that last-minute nervousness to stretch their unbeaten league run to nine games.

Cardiff City manager Malky Mackay: "I thought it was a really impressive performance. Obviously the last 30 seconds - the own goal - makes it a bit edgy... but apart from that I thought we were fantastic.

"I'm delighted with the way they applied themselves, controlled the game and saw the game out in the end.

"I thought we were immense in the first half, created four or five fantastic opportunities and on another day it would have been four or five goals."

Bristol City manager Sean O'Driscoll: "If we hadn't conceded a poor second goal we could have walked away with a point, which would have been extremely pleasing.

"The second goal was disappointing because every day in training we say we can't concede poor goals in this division. We didn't deal with that as well as we should have.

"They are a good team and with the front two of Campbell and Bellamy they deserve to be a good team. Their movement and interchanging caused us problems."