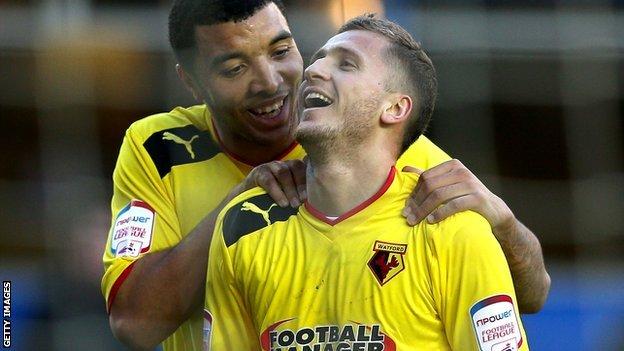 Deeney's free header on 38 minutes opened the floodgates, and an Anya drive doubled the score on half-time.

Anya then turned provider for Deeney's second before Abdi's strike in the dying moments completed the rout.

The three points take Gianfranco Zola's Hornets up to third, while Birmingham remain in a relegation scrap.

But from the off it was Watford's forwards who dominated. The first real chance came after 22 minutes but Deeney could only head wide Abdi's corner from six yards.

However, Birmingham did not heed the warning and 15 minutes later midfielder Nathaniel Chalobah flicked the ball out to the right for Anya. His cross found Deeney unmarked and six yards out and he made no mistake with his header.

The scoreline was doubled minutes before half-time as the lively Anya drilling an effort straight through Jack Butland, who will be disappointed not to have dealt with the shot.

Watford are the top-scoring team in the Championship, their 64 goals this season six better than nearest rivals Crystal Palace.

A chorus of boos rang round St Andrew's at half-time, but Blues did not improve after the interval and Watford made it three on the hour as Anya squared for Deeney to convert.

Watford were coasting but there was still time for Abdi to add a fourth in the closing stages after Butland could only parry Cristian Battocchio's effort to the edge of the area.

"Technically they are some of the best in the division.

"I think the difference between the two teams was in both final thirds."

Watford manager Gianfranco Zola: "It was a very good result, a good performance.

"I think there were some spells in the game which we were really good, I rate it one of the best performances considering the [injury] difficulties we had.

"But I do think we've played some better games than this."