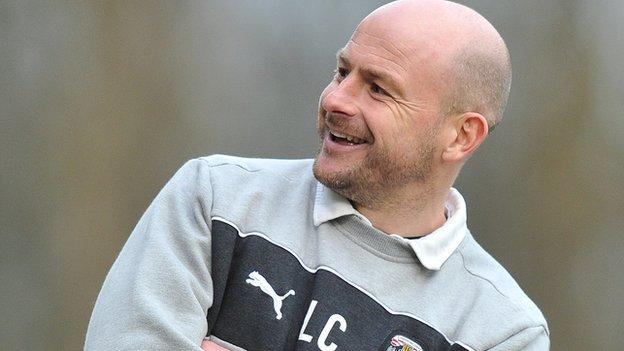 Striker Leon Clarke found the bottom right corner to set them on their way in the third minute, with his fifth goal since arriving in January.

But Carl Baker fired home from the edge of the box to seal victory late on.

Coventry, beaten at home in their previous two outings prior to Huddersfield-bound Robins' resignation, could have won by a bigger margin against struggling Bury.

The Sky Blues were ahead when Clarke shrugged off a challenge from Ashley Eastham before rifling a powerful finish through Trevor Carson's legs for his 15th League One strike of the campaign.

Stephen Elliott also blasted against a post, while James Bailey was denied on the line by Joe Skarz.

Home keeper Carson denied both Gary McSheffrey and Clarke after the break before Baker settled the outcome on 72 minutes with a low finish from 20 yards to help lift his side back to within five points of the play-offs.

Coventry had on-loan Watford defender Carl Dickinson making his debut at left-back, as Blair Adams faces a month out with a knee strain.

"It was a difficult one being 1-0 down after three minutes, and from a goal out of nothing really.

"After that, we got back in the game and always looked in the game, without really creating a clear-cut opening.

"We didn't test the keeper as much as we would have liked."

"The players have done themselves justice. They were outstanding.

"Today had nothing to do with me. It was about the players. You can see the quality we've got.

"It's felt a bit weird over the past few days. It's something I've been preparing for, something I wasn't expecting, but I've enjoyed today.

"We said it was a short term thing, so that's it. The players are playing to their potential, and they're selfish in the respect that they just get on with it which is what they've done."