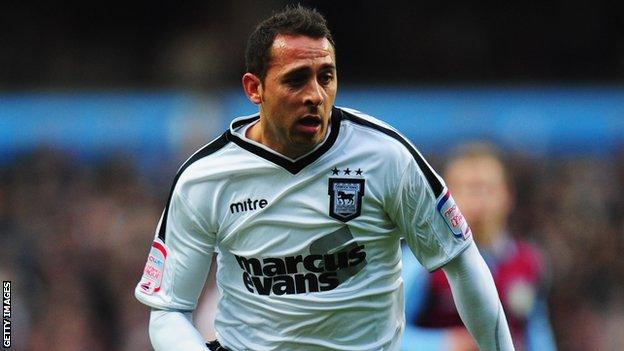 Substitute Chopra fired in from 12 yards for his fifth goal of the season after good work by Guirane N'Daw.

Tiago Gomes hit the post in the first half for the Seasiders with Ipswich goalkeeper Stephen Henderson turning away Alex Baptiste's goalbound cross.

The result condemned Blackpool caretaker-manager Steve Thompson to a fifth defeat in his seventh game in charge.

Mick McCarthy's Ipswich, who had won only one of their previous six league games, secured back-to-back victories at Portman Road, while Blackpool remain six points clear of the bottom three after only two wins in 10 Championship matches.

Ipswich's Carlos Edwards and Blackpool's Chris Basham both fired off target in the opening exchanges, with Blackpool goalkeeper Matt Gilks doing well to hold David McGoldrick's effort from the edge of the area.

Despite that chance, Blackpool went closest to taking the lead two minutes later when Gomes was denied his first goal for the Seasiders as his right-footed shot from inside the area hit the post.

Gomes then turned provider as Matt Derbyshire and Kirk Broadfoot went close with headers from the Spaniard's corners, while Daryl Murphy tested Gilks at the other end with a rasping drive.

Kirk Broadfoot limped out of the action shortly after the restart and Ipswich capitalised on uncertainty in the Blackpool defence when N'Daw played a long ball, which Chopra ran on to and steered a shot, left-footed, into the bottom corner.

"I'm not bothered how we get them as long as we get the points to keep us in this league.

"We need everyone scrapping and they we're all doing that."

Blackpool caretaker manager Steve Thompson: "We always said the first goal was going to be massive.

"The Tiago Gomes one was a great chance. He hit the post and if he'd pulled it back Matt Derbyshire had an open goal.

"I'm not saying it makes or breaks the game, but it could have been very important."