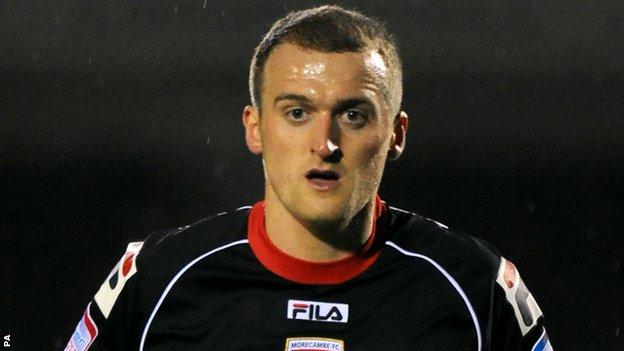 The Shrimps broke the deadlock on 63 minutes when Gary McDonald's cross fell into the path of forward Lewis Alessandra who bundled the ball home.

McDonald cleared Darren Purse's header off the line before Morecambe's Andrew Wright was sent off for two bookings.

With a man advantage, Vale piled on the pressure, but away keeper Barry Roche denied Jennison Myrie-Williams and Ryan Burge to help earn his side victory.

League Two top scorer Tom Pope also saw an effort cleared off the line in a goalmouth scramble as Vale lost for the first time since New Year's Day.

Vale drop back to second, two points behind Gillingham, who beat Dagenham & Redbridge.

Morecambe's solid display earned them their fourth victory in five matches to move them up to 10th.

"Vale are a strong outfit who have done well this season, and they've got a manager who knows what football's all about.

"They've got players who can hurt you and the top scorer in the division in their ranks.