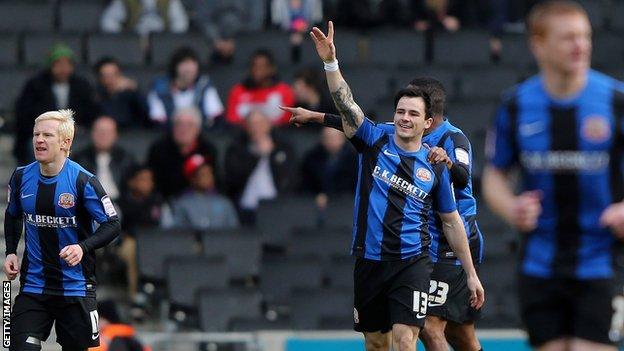 Chris Dagnall scored twice as Barnsley marched into FA Cup quarter-finals at the expense of League One MK Dons.

Dagnall fired the Tykes into an early lead with a fine left-foot finish which surprised keeper David Martin.

The Championship strugglers doubled the lead through Marlon Harewood before Dean Bowditch gave the hosts hope.

Barnsley lost Kelvin Etuhu to injury, but Dagnall struck during 12 minutes of stoppage time before Dons' Alan Smith was sent off for fouling Rory Delap.

On the evidence of what we have seen Barnsley will be staying up in the Championship. They were very good. They pressured MK Dons and were fantastic in possession. For 50-55 minutes they were different class. OK, they rode their luck a little bit after losing Kelvin Etuhu to injury but in Chris Dagnall they have a terrific finisher

Referee Mike Jones showed the former Manchester United and England player a straight red for leading with his arm, the 32-year-old's second dismissal of the season.

It capped a bitterly frustrating day for the hosts, who were eyeing another cup giant-killing to add to the scalps of Sheffield Wednesday, Queens Park Rangers and Blackburn Rovers in knockout competition this season.

But Barnsley, who have spent most of the season scrapping near the bottom of the Championship table, produced a thoroughly professional performance as they continued their rapid improvement under boss David Flitcroft.

Former Rochdale and Scunthorpe forward Dagnall gave the 2008 semi-finalists a flying start after latching onto Jacob Mellis's pass and firing an angled shot across Martin in the third minute.

It went from bad to worse for the Dons as Harewood, an FA Cup runner-up in 2006 with West Ham, added a second goal by side-footing home Scott Wiseman's 19th minute cut-back.

The tie was held up for seven minutes early in the second half following a clash of heads between Etuhu and Adam Chicksen, which left the former requiring medical attention before being carried off on a stretcher and taken to hospital.

And the disruption clearly disrupted the visitors as Bowditch kept his cool to slot past Luke Steele when he found himself one-on-one with the Tykes goalkeeper to give Karl Robinson's side renewed hope.

Steele tipped Smith's header over the bar before the wheels came off MK Dons' FA Cup adventure for another season.

Dagnall made it six goals in seven games after rounding Martin before Smith saw red.

"I didn't even know it was a foul, but you see Alan Smith going to try and compete and right away ultimately the referee thinks 'that's Alan Smith, he has tried to do him, sending off'.

"You could see it and, by the way, how quick did he go for his card? It looked like he couldn't wait to do it.

"But if he sticks to his report he will know he has made a big error. It was a very split game, they were the better team in the first half and we were better in the second half."

"The result meant everything.

"There has been so much detail and planning over a week now and we have put a lot of effort in.

"I'm absolutely delighted with the players."