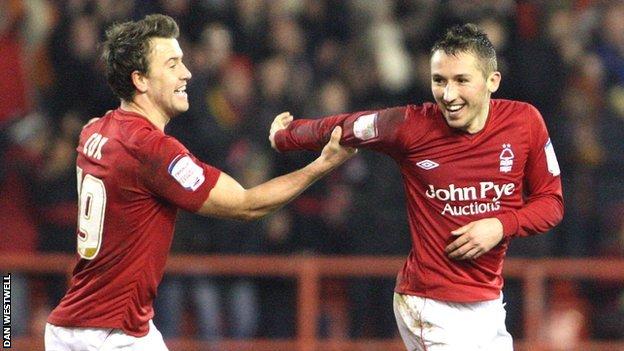 Elliot Ward struck to take the lead, then Majewski added two more before the break.

Huddersfield have now conceded 10 goals in two games under new manager Mark Robins, and are now one place and two points above the relegation zone.

Six of the worst

This was Huddersfield's second 6-1 defeat of 2013, with Leicester also handing out a hiding on New Year's Day

However, the game started promisingly for the Terriers, with Vaughan hitting the post with an overhead kick before converting Neil Danns' cross to put the Yorkshire side ahead.

Majewski equalised when he latched on to the rebound from a mis-hit Lansbury shot to record his first goal of the season.

Ward headed home an Andy Reid cross, before Forest's Polish midfielder trebled his tally, guiding home a Dexter Blackstock pass from the edge of the box for his second and smashing the ball in off the bar to complete his hat-trick.

Lansbury finished a solo run nine minutes into the second half to extend the lead even further, and substitute Henderson completed a memorable night for Davies when he struck deep into stoppage time.

"I said I had unfinished business but I meant promotion was the target within three-and-a-half years.

"The chairman has told us to do the best we can and win as many games as we can. There is a big expectation here and the fans are very demanding.

"It's the most embarrassed I've been as a manager.

"I can't believe how naive we've been. If you want to pass the ball then that's fine but you've got to win your battles.

"You try not to overact to a defeat but we need to be picking points up.

"We've got 14 games left and we need to start picking points up because we're in the thick of a relegation scrap."