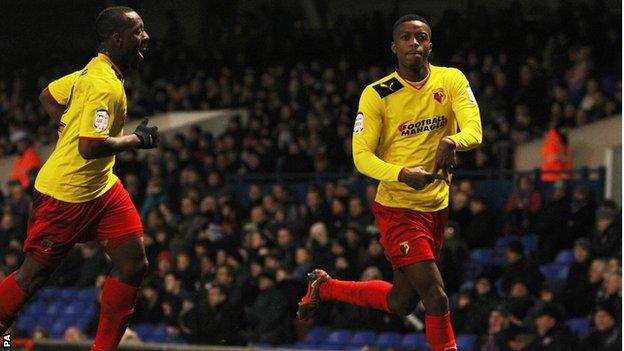 Watford kept the pressure on the Championship's top two with victory over strugglers Ipswich Town.

Jonathan Hogg struck the Ipswich bar before Ikechi Anya finished a tidy move to give the visitors the lead.

Town dug in and saw Michael Chopra's overhead kick saved before Tommy Smith had an effort ruled out for offside.

The hosts continued to increase their foothold in the game but Nathaniel Chalobah's burst forward and finish was enough to see the Hornets home.

Watford, chasing a return to the Premier League after a six-year absence, occasionally produced the slick passing and composure that has seen them win seven of their last 10 league games, while Town, unable to match their hosts for quality, displayed the grit and determination required for a Championship relegation fight.

Another happy trip to Suffolk

Watford have won six and drawn two of their last eight league trips to Portman Road, winning three in a row

The Hornets named seven of their 10 loan signings from sister clubs Udinese and Granada in their squad - a point of contention for some, including Crystal Palace boss Ian Holloway - and picked up where they left off in Saturday's 4-0 dismantling of Birmingham City, with former Aston Villa midfielder Hogg striking the bar from distance in the opening minutes.

And it looked ominous for the home side as Watford got off the mark with a clever move that saw Troy Deeney, making his 250th career appearance, help Hogg's cut-back on to Anya, who arrowed the ball through a field of defenders' legs and into the far corner for his second goal in as many games.

Town, who have been slowly edging away from the drop zone under Mick McCarthy after being bottom in November, rode out a period of Hornets possession and began to show the steel that the former Wolves manager's sides are renowned for - Richard Stearman most likely satisfying his boss's demand for commitment when having his dislocated finger popped back into place midway through the first half.

They grew into the game, powered on by the persistence of Guirane N'Daw in midfield and saw Lee Martin's penalty appeal following a challenge from Hogg turned down, before Chopra's sweetly hit overhead kick flew directly to a relieved Manuel Almunia in the Watford goal.

Gianfranco Zola's side had won nine on the road before arriving in Suffolk, the most in the league, but were almost pegged back when Smith tucked in the rebound after David McGoldrick's cross came back off Almunia, only for the linesman to raise his flag for offside.

However, Watford eased towards a third win in four games when Almen Abdi's sweetly weighted through ball was met by Chalobah's run and the Chelsea loanee fired home.

"We were beaten by a very good side. They're as good as I've seen this season in this league.

"We did all right to keep it to two and worked very hard, but Watford were quality and sometimes you have to hold your hands up and admit you were beaten by the better side.

"We need another four or five wins [to avoid relegation] and I believe we've got the ability and team spirit to get them."

"We're really playing well away from home. I'm delighted and I have to admit to being surprised by what these players are doing.

"They're really performing to levels that are unexpected by me, considering that we're a young team that have just been assembled this year.

"They're making me very proud and I was delighted by this victory.