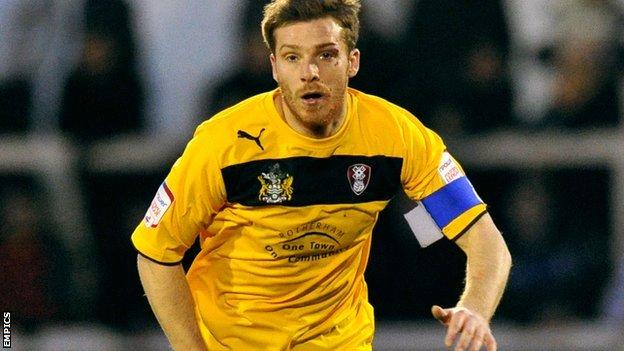 Rotherham moved to within one point of the automatic promotion places with a deserved victory over Chesterfield.

The Millers dominated the first half and striker Daniel Nardiello was denied by both the post and an excellent save from visiting keeper Tommy Lee.

Captain Johnny Mullins put the hosts ahead after the interval with a header from David Noble's corner.

Armand Gnanduillet should have equalised with the final action of the match but he miscued his header.

Steve Evans's side were in control throughout and are now just one point behind third-placed Burton Albion.

Chesterfield have slipped to 12th and are eight points outside the play-offs.

"Apart from the (lack of) goals I don't think the performance gets much better.

"We made a number of chances, arguably we could have had a penalty, but we got the victory and that's for the supporters.

"That's my first Rotherham-Chesterfield derby and what an atmosphere.

"It was such a dominant performance and that takes nothing away from (Chesterfield boss Paul) Cook, he's got some wonderful football players that play for Chesterfield."

"The best side won comfortably, we have no issues with that. Congratulations to Rotherham.

"I learnt a lot about my players today and it wasn't very good.

"We waited 60 minutes for Rotherham to score and then we started to have a go. It's not good enough.

"If you don't have desire to play football you get beat. Some of our players late on showed they do have it. One or two certainly showed they didn't and that's sad."