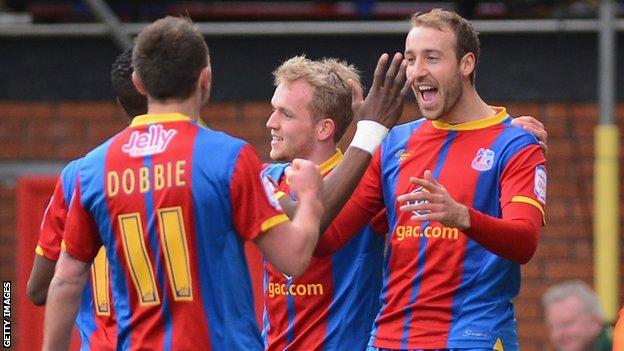 Crystal Palace moved up to fourth with a comprehensive victory over play-off rivals Middlesbrough.

Glenn Murray gave Palace an early lead with his close-range finish while Peter Ramage doubled their advantage after the break with a smart swivel and shot.

Murray made it 3-0 with a fine strike from 20 yards before Boro pulled one back through Faris Haroun's neat finish from Ishmael Miller's fine pass.

But veteran Kevin Philips sealed the rout with a late deflected goal.

England manager Roy Hodgson was in attendance, and while he may have been there to monitor Wilfried Zaha, it was Murray who was arguably the star of the show.

The 29-year-old striker's two goals took his tally for the season to 27 - more than any other player in England's four professional leagues.

Murray's first came in the ninth minute as he tapped in from close range following good work by Zaha to create the chance.

From then on Palace dominated, but they failed to convert that into goals, prompting manager Ian Holloway to tell his players they were boring him at the half-time interval.

Glenn Murray's current total of 27 goals is his best return in 10 seasons as a professional.

That comment seemed to have the desired result as the home side added a second just three minutes into the second half, Ramage hooking the ball into the net for his second goal in as many games.

A third goal duly arrived in the 57th minute with Murray launching a left-foot effort from distance into the top corner.

That goal put the result beyond a doubt, with Middlesbrough largely limited to trying their luck with long-range efforts that were of little trouble for Palace keeper Julian Speroni.

Middlesbrough did manage to pull one back 10 minutes from time as Haroun slotted in after being picked out by Ishmael Miller's flick on, but Palace restored their three-goal advantage minutes later when Phillips finished smartly after racing onto Zaha's through ball.

Crystal Palace manager Ian Holloway: "In front of the England manager, I thought Wilf [Zaha] was excellent. We have a few who make a difference - he is one of them. This was as good as he has played since I have been here.

"He is literally as good as any chef I have seen, and he has roasted their full-backs all day and they will be glad to see the back of him. I thought we moved the ball too slowly in the first half and told them that at half-time. I told them they were boring me - we upped the pace of doing things.

"We are getting stronger and the challenge is, can we get another 14 of them [wins]? That would be good, wouldn't it? We have to aim for the stars."

Middlesbrough manager Tony Mowbray: "We didn't get started, if we are looking for reasons, the amount we put in against Leeds in such a physical game [1-0 win on Tuesday] appears to have taken it out of some. But there are no excuses, individual errors cost us for the goals.

"We knew they had talented forward players, but my players are sitting there disappointed. We lost four goals at Ipswich a few weeks ago - we can't keep doing that.

"We are still in the top six and our ambitions are to remain there, we are capable of winning matches. We have to get back to our old form, but at the moment that seems a long way away."