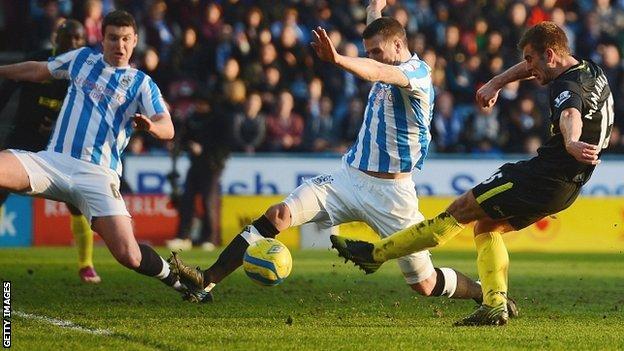 Callum McManaman helped Wigan reach the FA Cup quarter-finals for the first time in 26 years as they comfortably beat Huddersfield.

The 21-year-old opened the scoring when he angled his shot in after 31 minutes.

James McArthur drilled in a third and, although Lee Novak's header gave the Championship side hope, Kone added his second a minute before the end.

Wigan suffered a couple of scares in the second half as substitute James Vaughan also went close with a decent header, but once the impressive McArthur made it 3-0 11 minutes after the break it was an insurmountable task for the Terriers.

Wigan have now matched their best performance in the FA Cup, when they lost to Leeds 2-0 in the 1987 quarter-finals. At the time, Wigan were in the old Third Division

Roberto Martinez's side will now face Oldham or Everton in the next round, and they established their advantage in the game thanks to some clever wing play from McManaman, who is a distant relative of the former Liverpool winger Steve.

But it was perhaps surprising that new boss Mark Robins did not instruct his Huddersfield side to put the Premier League side under more pressure from the start.

The Terriers will now retreat to a key game against Nottingham Forest on Tuesday, as they aim to stay in the Championship, standing just three points above the relegation zone.

Martinez's side sit second from bottom in the Premier League but this was a performance that will give them confidence ahead of their own survival battle.

The Spaniard shuffled his pack and if he was after a response from his fringe players, he was given a firm reply from McManaman, who has yet to start a Premier League game this season.

Wigan's challenge was made easier by a Terriers team who, at first, allowed them to stroke the ball around with some ease.

It was a missed opportunity given that the pitch bore the scars of the Super League fixture between Huddersfield Giants and Wigan Warriors on Saturday, and Wigan's fluidity began to cause problems when McArthur started to find gaps in the midfield.

He was the supply line to McManaman, who, before his opening goal, had already crossed for Gomez, only for the Spaniard to head over from close range.

Huddersfield threatened when Alan Lee headed over from further out but the Terriers went behind when McArthur picked up the ball, fed McManaman down the left and, with the hosts' defence retreating, the former Everton trainee stroked the ball into the top corner.

Wigan's second goal nine minutes later came from the same source. This time McManaman crossed for Gomez and when his shot was blocked on the line, Kone tucked in, although there was a suspicion of offside.

As a lone striker, Lee was struggling for support and Robins brought on Vaughan and Novak at half-time to give an added threat up front.

It seemed to cause Wigan more worries at the back, with Vaughan's firm shot saved by Wigan keeper Joel Robles.

The Latics rode that spell of pressure and the impressive McArthur then put his side in charge when he scored a beauty after 56 minutes. The midfielder received McManaman's pass in the inside left channel, played a one-two with Gomez and arrowed a bullet shot into the top corner.

As a result, it looked like the game was over as a contest, but Novak clawed a goal back when he jumped high to nod in Calum Woods's left-wing cross.

Vaughan, who was booked for a rash challenge on Fraser Fyvie, also headed just wide, but Kone took advantage of Anthony Gerrard's mistake to seal the win.

Huddersfield boss Mark Robins: "I thought it was tough. You know with whatever side you put out that they're going to stretch you and pass the ball and find spare men. If we can't get into the right areas to stop them from playing and stop them from finding the spare men then you're going to come a cropper.

"In all fairness, in the first half we really struggled to cope with their movement. In the second half, we were better than the score line suggests, but we were still sloppy in some areas. We managed to get a goal and created a few more chances, but there wasn't enough of it. We need to be better with and without the ball."

Wigan boss Roberto Martinez on McManaman: "He's a real talent. He's an old-school footballer but he gets really hyped-up for the games, and we told him yesterday that he wasn't playing so that he would not be upset overnight and just concentrate on having a good sleep.

"This morning when he found out he was delighted - and it showed in his performance because he managed 90 minutes for the first time this season."