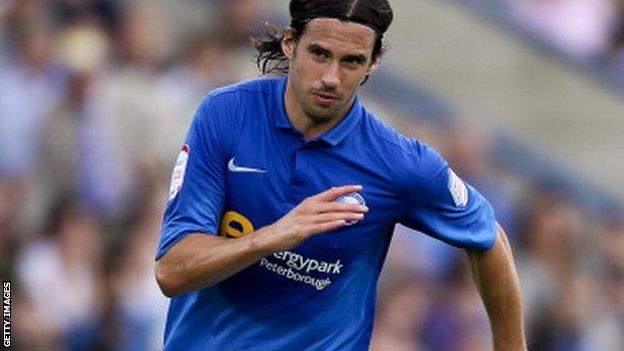 Peterborough moved off the foot of the Championship table and to within five points of safety with an impressive performance against 10-man Millwall.

Posh regained the lead through captain Tommy Rowe and after the break George Boyd supplied Tomlin for his second.

Nathaniel Mendez-Laing scored before Shane Lowry was sent off for a foul on Dwight Gayle. Boyd completed the rout.

It is the team's worst league sequence under Kenny Jackett and their lack of confidence was evident against a team that has won five of their last nine league games.

The visitors started well, taking the lead in the seventh minute as Boyd cut back for Tomlin's ninth goal of the season.

Millwall levelled as Lowry released Henry who beautifully chipped over Robert Olejnik for his third goal in as many games.

Peterborough attacked with verve and once again took the lead 13 minutes before the break through Rowe after good work by Boyd.

A defensive error by defender Karleigh Osbourne led to Tomlin's second, while Mendez-Laing all but secured the victory by weaving through two defenders before beating David Forde with a venomous shot.

Referee Darren Bond then showed Lowry a red card for fouling Gayle, who was through on goal, and Boyd capped a brilliant individual performance with the fifth and final Peterborough goal.

"We have got a lot of games [coming up], eight games in 25 days, and that is one of them out of the way.

"If we can play like that and defend as well as that I think we will be okay, I really do. I'm fully prepared, and I've told the players this, that I think it will go down to the last game. We are fully prepared for it and will meet it head-on.

"We will enjoy the challenge. We won't fail for commitment or mental approach to it and we will see where it takes us. If we have a performance like this and have that consistently you have got to have a right chance."

"We had an awful lot of the ball right the way through the game and didn't do enough with it.

"(We had) no cutting edge up front. In terms of our defending, we didn't have the awareness and Peterborough were capable of breaking from the first minute.

"We've lost five games on the trot now in our division and it seems to have run alongside a very good cup run."