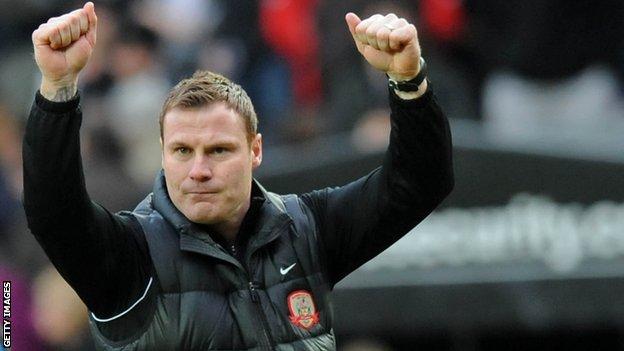 Barnsley's unbeaten run continued as they moved out of the Championship relegation zone with a win over struggling Wolves.

The Tykes are unbeaten in nine games since David Flitcroft took over as manager, but were behind early on when Bjorn Sigurdarson scored.

The home side dominated until Chris Dagnall equalised with a header.

Jacob Mellis grabbed the winner on 73 minutes to give Barnsley a sixth straight win in all competitions.

In sharp contrast to Barnsley's revival since the dismissal of Keith Hill, Wolves are still searching for a first win in seven games under Dean Saunders.

Out of the bottom three in the Championship, Barnsley's run of nine games without defeat have also seen Flitcroft's side earn an FA Cup quarter final at Premier League champions Manchester City.

The night had started well for Wolves, when Sigurdarson latched onto Bakary Sako's precise pass and rolled the ball home after rounding Barnsley goalkeeper Luke Steele.

But when a shot from Jamie O'Hara that appeared to cross the line after hitting the underside of the bar was not given as a goal, the game swung in the home side's favour.

Marlon Harewood spurned two good chances to equalise before half-time, and Dagnall hit the side-netting seconds before the break, although Sako had fired over and forced Steele into a low save.

Barnsley continued to press after half-time, and they drew level when Dagnall headed in Rory Delap's cross off the post for his eighth goal of the season.

The equaliser spurred Wolves into action, with Sylvan Ebanks-Blake curling a shot wide and Sigurdarson bringing a fine save out of Steele.

But Barnsley forced the winner when O'Grady touched Dagnall's cross into the path of Mellis, who side-footed the ball home via a deflection.

"I said to the lads at half-time that we just needed one goal. Once we got that, I knew we would win the game.

"The performance after getting an incredible draw in the FA Cup was superb. That's why the win is incredibly big - we have had get back to earth.

"On Sunday night, I was dreaming of the Wolves team and Manchester City. I had Sylvan Ebanks-Blake linking up with Sergio Aguero. So I had a sleepless night"

"We just need a bit of luck. Jamie O'Hara's shot might be over the line and we go 2-0 up. We could have scored a few more.

"We have had chances and it's just not going for us at the minute.

"It's a kick in the teeth. Everyone is trying their best. We just need to get one win and then we can relax when we get it front."