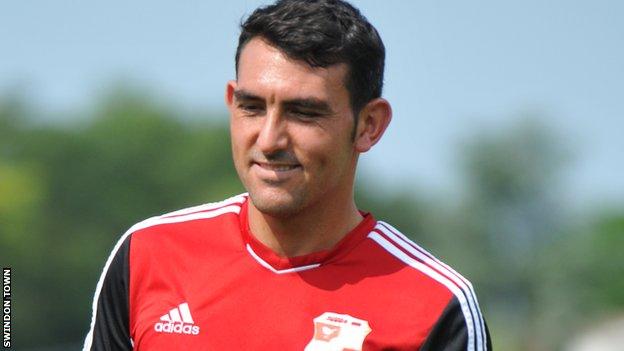 Swindon began life by going top of League One with victory at Tranmere Rovers as Fabrizio Piccareta won his first and only game in charge before resigning.

James Collins latched on to a through ball to score his 15th of the season and Gary Roberts' volley made it 2-0.

Donervon Daniels bundled in to close the gap, before Roberts scored a spectacular second from his own half.

Piccareta then said he and his coaching staff would quit on Wednesday.

The Italian stated: "We leave the team top of the league in League One but it's the outcome of the fantastic job that Paolo Di Canio and the team and ourselves as technical staff have done in the last two years.

"We are here for Paolo Di Canio and we will follow him everywhere even if he coaches at Real Madrid or Luton Town because we are a team and we have shown these past two years that if you have a strong team and all the people involved are a strong team you can make a fantastic achievement."

Collins was a menace throughout the game and looked the most likely player to break the deadlock in the first half.

The Swindon striker twice went close in the first half with his second effort forcing a fantastic save from Rovers goalkeeper Owain Fon Williams.

But the hosts got stronger as the half went on and Cole Stockton shot over and put a header wide just before half-time.

Collins scored three minutes after the break from a Simon Ferry through ball and Roberts had a goal disallowed for offside as Swindon continued to dominate.

Zoumana Bakayogo went close for Tranmere at one end, before Roberts' spectacular strike made it 2-0 to Swindon.

Daniels reacted first in the box after Swindon failed to clear a Max Power free-kick to give Tranmere hope.

But, with Tranmere keeper Fon Williams joining the attack as Rovers went in search of an equaliser, Roberts fired the ball into an empty net from his own half.

"Swindon have got quality players. That's why they're top of the league. We've got workhorses who'll give their all.

"When we've got our best 11 in we're a match for anybody, but at the moment we haven't got that.

"We don't look like we're going to keep a clean sheet and our two centre-halves are not playing particularly well. Maybe that's an area we need to look at for the Colchester game [on Saturday]."