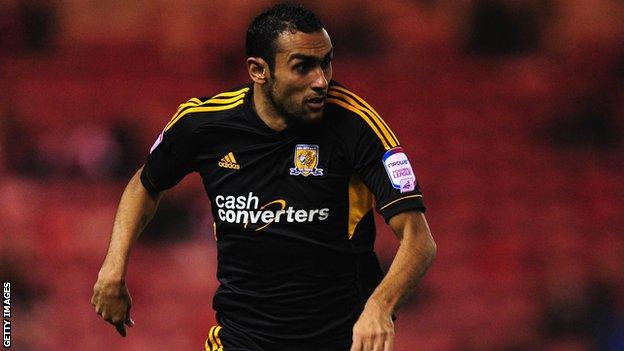 Gedo broke the deadlock by side-footing home Stephen Quinn's cross, his third goal in four games since signing on loan from Al Ahly.

Why Hull fans have taken to Gedo

The 28-year-old has scored in his last three appearances for the Tigers. He hit the winner in the 1-0 win over Charlton on 16 February having also scored in the 2-1 success over Derby County four days earlier

Hull have won four of the last five league games and in Gedo and Elmohamady have found a potent scoring combination.

Blackburn would have suffered a heavier defeat but for 22-year-old Kean, who produced excellent saves to deny David Meyler and Gedo before the latter scored in the 52nd minute.

Robert Brady's corner fell to Stephen Quinn, whose fine cross into the middle allowed Gedo to side-foot back into the net.

The busy Kean then produced another fine stop to deny Jack Hobbs from a corner before Hull establish added a second in the 67th minute.

Brady's cross to the back post found Elmohamady who lashed the ball home first time to condemn Rovers to a first Championship defeat since 19 January.

"We needed it. We needed somebody to come. We all know what happened on deadline day.

"To get three in three, I know he'll hit a wall but, hopefully, with the sun shining [when] it gets into spring. He's a very, very good player.

"He uses that bit of class, he's got good ability and thankfully he's got three in three which is the icing on the cake for us."

"I think obviously after the euphoria of Saturday there was always a danger of the players being unable to pick themselves up and repeat the type of performance they showed.

"You've got to give credit to Hull. They started the game OK and they certainly came out of the blocks second half really well."

"He's obviously a lad who's had an opportunity and his reputation is growing game by game.

"He's got half a chance, the kid. At the start of the season he was probably third-choice goalkeeper and he's taken the mantle on and he's earned the right to be number-one keeper at the minute."