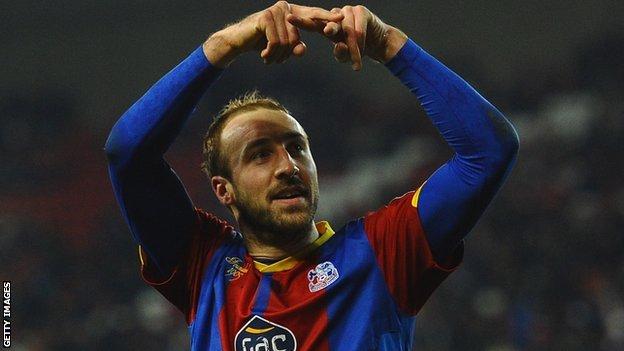 Glenn Murray's impressive goalscoring season continued as the Crystal Palace forward took his tally for the season to 28 in the win over Bristol City.

Murray, the country's leading marksman, opened the scoring after volleying home from a tight angle.

Substitute Stephen Dobbie added a second for Ian Holloway's promotion-chasing side from a free-kick.

An own goal by Jonathan Parr reduced the deficit but Palace held on for their third win in four games.

In contrast, defeat pushed City down to the bottom of the Championship - six points from safety.

Palace controlled the game from the start and were unfortunate not to score when Yannick Bolasie's stunning overhead kick cannoned back off the woodwork.

Wilfried Zaha had a shot deflected wide and Peter Ramage headed over before the goal Palace had been threatening finally arrived.

Skipper Mile Jedinak took a quick free-kick over the top to Murray, who expertly volleyed home on the run from a tight angle 10 minutes before half-time.

Palace extended their lead when Dobbie notched his first goal for Palace just four minutes after coming on as a substitute.

The on-loan Brighton striker was brought down outside the area before picking himself up to curl home a delightful 64th-minute free-kick.

City did find the net when Parr made a mess of a cross into the box and headed it past his own keeper in stoppage time.

But the visitors could not find the leveller and are in trouble after a third defeat in four league games.

"That is six points from two games and it's a long way to go yet. But we are improving all the time and it has been a good night.

"It's exciting times for us. It all bodes well and let's see what we can do.

"There's some big games coming up for us. It's another win to notch up and we move on to the next one."

"We were brave and pressed high up the pitch. We gave it our best. I would have taken the performance, but not the score all day long.

"Nothing fazed us, we kept going but we are bottom of the league. If you have a group of payers prepared to do that then that is gold-dust.

"The worst case scenario is getting beat twice, thumped, the spirit broken and the attitude is not right. We are a million miles away from that."