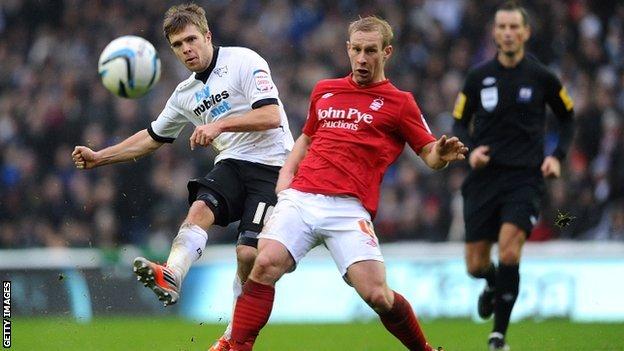 Jamie Ward's 10th goal of the season earned Derby a draw against Bolton.

The striker tucked in a header from Michael Jacobs's cross nine minutes from time to bring the Rams level.

It followed Richard Keogh's first-half own goal after he glanced in Jay Spearing's free-kick.

Adam Bogdan saved Theo Robinson's close-range header late on as Derby secured a third draw in four matches with Bolton still searching for their first away win since November.

Derby have won just one of their last seven Championship matches but Craig Bryson was close to putting them in front when he was off-target following Paul Coutts's cross.

Bolton made the breakthrough in added time at the end of the first half when Spearing's inswinging free-kick from the right grazed the head of Keogh and the ball flew past the helpless Adam Legzdins.

Bolton keeper Bogdan was called into action for the first time just before the hour mark. The Hungarian kept out Coutts's volley with a strong one-handed save low to his left.

Derby were on top but without the injured Will Hughes, they just could not make the breakthrough. They came close again after 73 minutes when Conor Sammon's shot from inside the area on the left-hand side went just wide of the far post.

Substitute Robinson then guided a volley straight into Bogdan's arms from 10 yards out.

However, from the next attack Ward arrived at the far post to guide a stooping header across Bogdan and into the bottom corner of the net from Jacobs's cross.

Derby sensed a winner - and it almost came five minutes later but Bogdan stuck up a hand to keep out Robinson's effort.

"It was a good point in the end when you're 1-0 down, but overall I think we deserved three.

"We showed great character to come back and get a point, I'm absolutely delighted with the lads.

"We are sitting here with three points from our last four matches but we could quite easily have nine or 10."

"We tried to go two up top with the strikers and go toe-to-toe with Derby, and we were quite comfortable at 1-0 up. But Derby got a deserved equaliser, I must admit that.

"There's more in us. People might think this is a good result for Bolton, but it's not quite good enough for me."