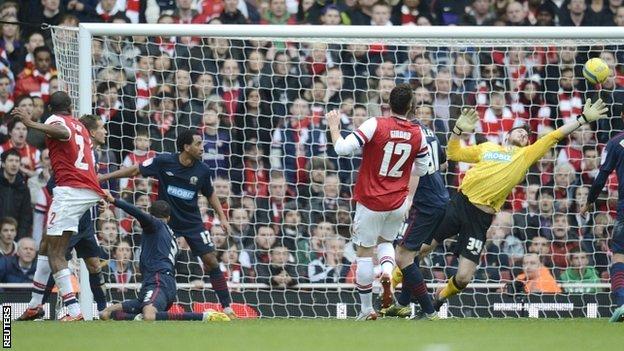 Arsenal dominated with Gervinho failing to hit the target from a good position and Jake Kean making several key saves.

Tomas Rosicky hit the bar after the break but the Championship side scored when Kazim-Richards followed in on Martin Olsson's shot.

Theo Walcott was denied late in the game as Arsenal's hopes of ending their eight-year trophy drought were dented.

"Blackburn just kept believing they could get something out of this game.

"The amount of pressure Arsenal were putting on them at the end was relentless. Grant Hanley and Scott Dann will not have played a better game this season, or even in their entire careers.

"An outstanding performance from Blackburn."

The Gunners could not find a way through Blackburn's defence as Michael Appleton's team defended for their lives at the end of the game. Mikel Arteta was another Arsenal player who shot off-target.

It means Arsene Wenger's team have only the Champions League left if they are to win silverware this season, having already been knocked out of the Capital One Cup by League Two side Bradford in December.

Appleton has already lost in the FA Cup this season, when in charge of Portsmouth, and was manager at Blackpool in the third round when they drew with Fulham before the 37-year-old left the club.

But he has overseen a transformation at Ewood Park during his short time at Rovers, who were relegated from the Premier League last season. This victory extended his side's unbeaten run to six games after suffering defeat by Charlton in his first match in charge on 19 January.

Blackburn are yet to concede in the FA Cup this season and have now reached the quarter-finals for the first time since 2007 and sit six points off the play-off places in the Championship.

Having made seven changes to the side which defeated Sunderland 1-0 last weekend, it was clear Wenger had one eye on Tuesday's Champions League tie against Bayern Munich.

But the Frenchman may live to regret waiting until 70 minutes had passed before bringing on substitutes Walcott, Jack Wilshere and Santi Cazorla as his side chased the game at 0-0.

Gervinho returned from an impressive Africa Cup of Nations tournament with the Ivory Coast to start his first Arsenal game since that penalty shoot-out loss to Bradford on 11 December.

Unfortunately, his biggest contribution in a first half dominated by the Gunners was to drag his shot wide when he was put through by Rosicky after 41 minutes.

For all their possession in an opening period where Arsenal had 12 corners, Wenger's team did not forge many openings. And when they did, the impressive Blackburn goalkeeper Kean saved headers from Abou Diaby and Thomas Vermaelen, who returned to the side after injury.

Rovers brought on former Gunner David Bentley to try and make an impression, but it seemed to rouse the home supporters before Rosicky smacked a long-range shot against the bar.

That was his last meaningful action as Wenger brought on his trio of substitutes to try and avoid a replay in an already-congested month.

But Blackburn went ahead two minutes later. Wojciech Szczesny could only palm Olsson's angled shot away and Kazim-Richards's scuffed rebound went in off the post.

It was a stunning blow by the Rovers striker, a boyhood Arsenal fan.

Walcott injected some much needed urgency into the Gunners' play and his header from Wilshere's cross could not breach the Blackburn rearguard as Appleton's side held on for a famous victory.

Blackburn manager Michael Appleton: "Colin Kazim-Richards has been fantastic for the last five games and has played in a couple of different roles.

"I am delighted he got the reward for all of his work, it was not his greatest of strikes, but I think he was just trying not to welly it into Row Z and got the bit of luck he deserved.

"I had a brief stint at Blackpool when I ended up with a 1-1 draw at Fulham in the last round, then was lucky enough to win at Derby, but this is the icing at the top of the cake."