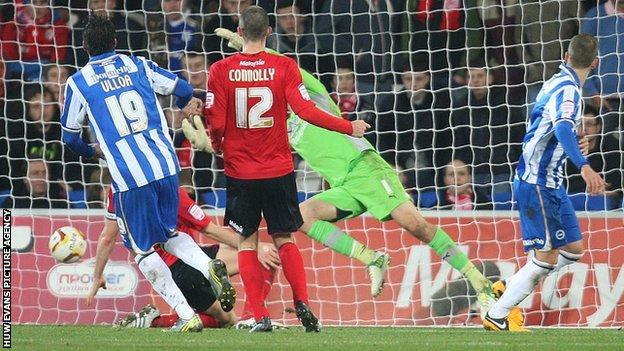 Cardiff City's lead at the top of the Championship is down to five points after Brighton's hard-earned 2-0 win.

Midfielder Andrea Orlandi struck just before the interval to give the Seagulls a 1-0 half-time lead.

And Leonardo Ulloa scored a deflected goal in second-half added time to seal the victory for Brighton and boost their play-off bid.

With main rivals Hull and Watford both winning, it was bad news all around for Cardiff manager Malky Mackay on his 41st birthday.

Much of the pre-match publicity had surrounded the decision by Cardiff City's Malaysian owners to hand out red scarves to the Cardiff fans.

But it was the points given away which will be of greater concern to the supporters, though they still have an eight-point cushion over Watford in the automatic promotion places.

The Bluebirds went into the game unbeaten in nine matches, having won seven of those.

And for much of the first half, they looked the more likely to take the lead as Brighton goalkeeper Kuszczak had to be on his toes to keep a clean sheet.

Craig Noone had a chance in the 15th minute after a strong run by Andrew Taylor, but his delicate attempt was saved by the Pole.

Cardiff City had lost only once in the league at home this season, the 2-1 defeat by Peterborough on 15 December.

That match was also their last defeat in the Championship - a run of nine games unbeaten before this match.

And Kuszczak had to be on his toes again when Peter Whittingham fired in a shot to the near post from 25 yards, and within minutes it was Bellamy's turn to test the Brighton keeper, who got lucky when he somehow managed to deflect the Welsh international's shot onto the crossbar.

Brighton's first real sight of goal came when Ulloa forced a good save from David Marshall following a free kick by Matthew Upson.

But the best chance fell to Bellamy on the half hour when he latched on to a loose back pass but saw the ball taken off his toes by Kuszczak as he tried to round him.

City's success at home had been built on a mean defence which had conceded only nine goals all season in Cardiff.

But they were caught out just before the interval as David Lopez Moreno broke down the right hand side and former Swansea player Orlandi flicked his cross in from close range to give the visitors an unexpected interval lead.

The goal inspired the visitors who started the second half stronger, without really testing Marshall in the home goal.

And the bad news for Cardiff City was that Brighton had not lost a game all season in which they had scored first.

The Bluebirds did force the impeccable Kuszczak into action again when substitute Craig Conway - on for Noone - fired a long range shot that stung the fingers of the goalkeeper.

The Bluebirds continued to press and Bellamy fired wide from eight yards when he should have hit the target, and then Aron Gunnarsson missed a golden opportunity as he headed wide from close range.

And as Cardiff pressed for the equaliser, the Seagulls broke quickly and put the game beyond doubt when Ulloa's shot was deflected past Marshall.

"In the first half we had four or five good chances to their one, and despite the goal before half-time we came out in the second half and penned them in and ended up with 22 attempts on target, which is incredible.

"I thought the goal was coming to be honest, because of the pressure we were having but, it was one of those nights where the goal led a charmed life.

"Some of our finishing was poor and there were sometimes it was not the keeper keeping it out."

"We were fortunate to get Tomasz Kuszczak as I think he is a Premier League player and he is one of the best keepers outside of it.

"Hopefully he keeps giving us performances like that. If you are going to achieve anything in this league - or any league - you need a good goalkeeper.

"I think Cardiff will be untouchable and they won't get caught so the boys are delighted to have won it."