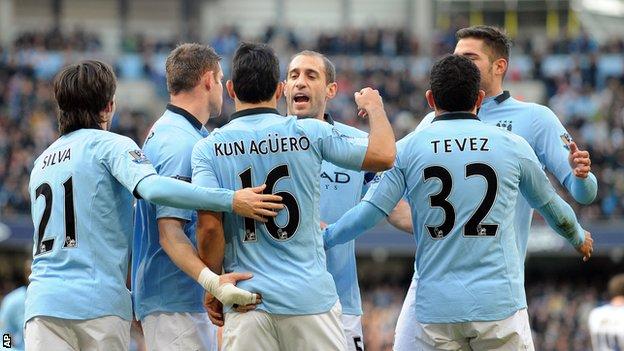 Manchester City made comfortable progress into the FA Cup quarter-finals as Leeds United were completely outclassed at Etihad Stadium.

The FA Cup is now City's most likely source of silverware as they lie 12 points adrift of Premier League leaders Manchester United, and manager Roberto Mancini's side played with real purpose to win easily.

Yaya Toure opened the scoring after only five minutes and when the outstanding Sergio Aguero swiftly added a second from the penalty spot any hopes Leeds United manager Neil Warnock had of springing another shock were over.

Leeds eliminated Tottenham at Elland Road in the last round but they were hopelessly out of their depth as the champions took control quickly and did not relinquish it at any point.

Carlos Tevez bundled in City's third just after half-time and Aguero rounded off an impressive personal display with his second 16 minutes from time.

Leeds were backed by 6,000 travelling fans, but there was little enjoyment on offer and they turned their anger on the manager in the second half with loud chants of "Warnock Warnock time to go."

For City, there was delight in the ruthless manner of the victory and also the fact that Mancini remains on course to challenge for another major trophy this season.

As they attempted to regain momentum following the dismal defeat at Southampton saw their chances of retaining the Premier League recede even further, Mancini maintained his FA Cup policy of replacing keeper Joe Hart with Costel Pantilimon.

The Romanian keeper was almost a bystander as City completely dominated proceedings and effectively had their place in the last eight wrapped up inside the first 15 minutes.

City soon doubled their lead from the penalty spot through Aguero, with a slight pull from Tom Lees being detected by referee Mark Clattenburg.

Leeds, apart from the odd moment of trademark misplaced aggression from veteran Michael Brown, caused City little discomfort other than from a Ross McCormack free-kick that was punched to safety by Pantilimon.

Any lingering doubts about City's progress, and there were few, were erased seven minutes after the restart. Leeds were never able to cope with the speed and movement of City's attacking players and this time David Silva and Aguero linked sweetly to provide Tevez with a simple finish from almost on the line.

Mancini felt comfortable enough to give Jack Rodwell a rare outing as substitute for Javi Garcia, and the £12m summer signing was almost on the mark immediately but headed against the bar after Yaya Toure's shot was palmed into the air by Ashdown.

City were completing the formalities now and the excellent Aguero added his second with a composed 74th-minute finish from Silva's superb pass.