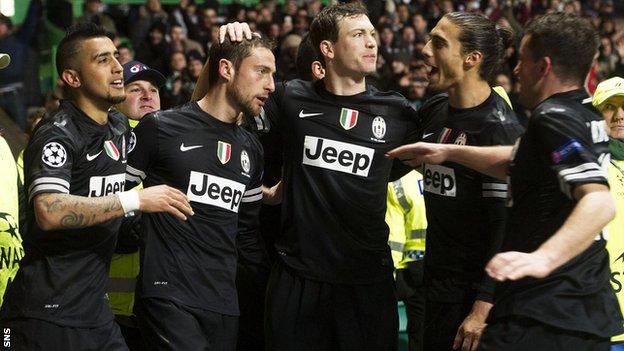 If Neil Lennon thinks his Celtic side need a miracle, the Italian media reckons his opponents have already achieved one.

It was 44 years since a Serie A team last triumphed in European competition against the Parkhead side in Glasgow.

"It's a fairytale for Juventus," trumpeted La Gazzetta dello Sport.

"Celtic were brushed away by an early goal from Matri and Marchisio and Vucinic towards the end.

"The Bianconeri managed to cope with the attacks from a team which was physical but of modest quality.

"Juve managed quite an achievement and made it look easy. But history says that no Italian side had won at Celtic Park since 1969, despite eight attempts to do so."

Turin-based publication Tuttosport was also full of praise for Juventus, and their manager in particular.

"Conte enjoys his little work of art," it reported.

"Juve won in Glasgow with a display worthy of a big side."

And they quoted the boss saying: "It was an important victory but one we had to suffer for.

"Celtic are a good side and they played above themselves at times.

"They pressed us in an incredible fashion but we did well to withstand that and then go and score."

In the Corriere dello Sport, they hinted that La Vecchia Signora might even have what it takes to win the Champions League.

"More than a victory, this was a triumph," said its editorial.

"Three goals and qualification for the quarter-finals is in the bag since the return leg on 6 March will be little more than a formality.

"Matri, Marchisio and Vucinic made it look easy.

"But appearances can be deceiving because Celtic had not lost on their own ground to an Italian side for ages.

"Juventus were impeccable, they struck early, withstood the first half attacks from the Scots, and then killed them off with two perfect counter-attacks."