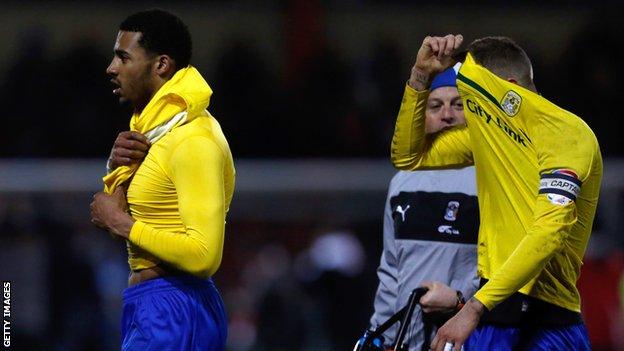 Crewe sealed a second Wembley trip inside a year after making the final of the Johnstone's Paint Trophy despite defeat by Coventry in their second leg.

Trailing 3-0 from the first leg, Coventry made a bright start with Leon Clarke heading wide from close range.

Stephen Elliott came close to connecting to Gary McSheffrey's cross but in injury time Mark Ellis's own goal saw Coventry pull one back.

And just 30 seconds later Clarke's header made it 2-0 but Crewe held on.

Steve Davis's side were promoted from League Two in the play-off final at Wembley in May and they will return there for a game against Southend,

It was Southend who Crewe beat in the play-off semi-final on the way to their promotion from League Two last season and the pair will meet on 7 April.

The Sky Blues could have reduced the arrears as early as the fifth minute when Clarke connected with Carl Baker's cross but the striker's header went inches wide.

Coventry had the better of the chances but looked to be heading out until the late drama.

As the game entered injury-time, Ellis looped a long punt over his own goalkeeper before Clarke headed in Carl Baker's cross to set nerves jangling, but Crewe held on.

"I can't believe it, it was an amazing night full of mixed emotions.

"We were in full control of the game, they got a goal from nothing, and that gave them a life line.

"It's about getting through and that's what we've done so I'm pleased.

"We've taken it seriously from the start, we've had a good run and this is reward. We are not going to win the FA Cup or League Cup and this is a chance to get to Wembley and we've done that."