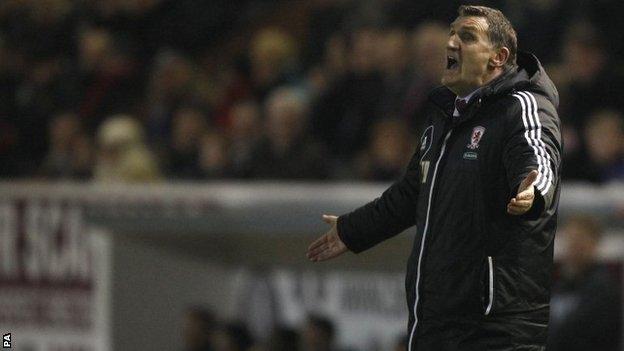 Middlesbrough's slump continued as they were held to a goalless draw at Burnley but Tony Mowbray's side remain in the play-off places in the Championship.

Boro have won just once in the league in 2013 and needed some smart saves from goalkeeper Jason Steele to earn a point at Turf Moor.

England Under-21 international Steele saved well from Charlie Austin and Dean Marney in the first half.

Middlesbrough have only won once in the league in 2013, a 1-0 win over Leeds on 12 February

Burnley, who are now seven points off the top six with a game in hand, saw Steele at full-stretch to turn Austin's first-time effort from the edge of the box behind in a bright start.

Marney then saw his near-post header kept out by the alert Steele before Boro finally mounted some pressure after the break.

Grant Leadbitter hit a low free-kick wide, Main put a snap-shot wide and Carayol gave Burnley goalkeeper Lee Grant his first serious work of the evening in stoppage time with a swerving, dipping long-range strike that was tipped over.

Boro are still in sixth place in the table, but are now just two points ahead of Brighton, who have a game in hand.

"We played well for a large part of the game, kept the ball and dominated the possession stats and chance stats without really opening up that one clinical moment to finish it.

"It's a knife-edge sort of feeling. That's a side who are sixth and have got a lot of big players and they've come here and defended. That was the intent.

"It kind of shows how far we've come as a team and as a club to be recognised as someone who is still in there with a real chance of chasing the dream."

"From our perspective we've conceded too many goals on the road recently.

"We've got a lot of injuries. I think it was 12 first-team players injured tonight and I don't make any apologies for coming and making sure that we were defensively solid.

"A really hard-working team was picked and a lot of attacking threat was left on the bench to try and make sure we stayed in the game.

"I was pleased that we kept a clean sheet, that we worked extremely hard for each other - it's been a difficult month-and-a-half."