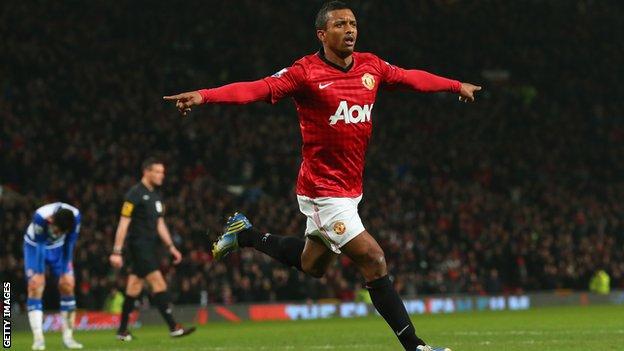 Nani scored one goal and created another for Javier Hernandez to take Manchester United past Reading and into the FA Cup quarter-finals.

The Portuguese winger, on as a first-half substitute for the injured Phil Jones, struck the opener from Antonio Valencia's pass.

He then crossed for Hernandez to head past keeper Adam Federici.

Jobi McAnuff pulled one back, but United held on to set up a home tie against Middlesbrough or Chelsea.

Manchester United were facing Premier League opposition for the seventh FA Cup tie in a row. It was their 22nd pairing with top-flight opposition in their last 27 FA Cup ties.

The loss of Jones, who limped off with an injury to his right ankle after a first-half challenge on McAnuff, will be a concern to United manager Sir Alex Ferguson.

And the Premier League leaders made heavy work of beating a spirited Reading side before securing the victory that took them into the last eight.

Ferguson made eight changes to the side which earned a 1-1 away draw against Real Madrid in their Champions League last-16 first-leg match last Wednesday, with only David de Gea, Jones and Danny Welbeck retaining their places.

United made most of the chances in the opening 45 minutes, and looked as if they might overwhelm McDermott's side with an early burst of pressure, but the visitors defended solidly and Federici was only rarely called into action.

The keeper reacted well to stop Welbeck's early drive, moments after the United striker and team-mate Valencia had been unable to turn home a loose ball when Hernandez had a shot blocked.

Federici made a terrific double save midway through the first half, pushing aside Tom Cleverley's 20-yard drive and then recovering to turn Ashley Young's follow-up around the post.

Reading striker Noel Hunt had to change his shirt twice after an early aerial collision with defender Nemanja Vidic that left both men bleeding, and needed additional treatment at half-time.

The visitors rarely threatened in the first half, although McAnuff had a penalty appeal rejected after claiming he was fouled by Jones as he tried to drive into the United penalty area.

Sir Alex Ferguson's side have won their last six FA Cup ties at Old Trafford. They've lost to a fellow Premier League club on their own ground only once in nine years; 1-0 to Portsmouth in the sixth round in March 2008.

With the home side temporarily reduced to 10 men after Jones went off, Le Fondre turned on the edge of the penalty area and hit a shot that De Gea held.

But Reading had two escapes at the end of the first half, when Nani struck the post with an excellent volley, and then hit a left-foot strike from the edge of the penalty area that Federici did well to push aside.

United continued to press in the second half, with Hunt clearing a deflected Vidic header off the line, before Federici saved from Anderson and Nani flashed a shot wide.

Ferguson's obvious frustration at the visitors slowing the game down extended to a message apparently being sent to the ball-boys to do their jobs with a little more speed.

But United finally broke through when Nani collected Valencia's pass and drove the ball into the corner of the net.

But McAnuff set up a nervous finale for United when he wriggled through to slot the ball home and give McDermott's side hope.

Le Fondre almost equalised in a frantic finish, with Hernandez denied by Federici at the other end, as United saw the game through.

"The last 10 minutes were a bit scary.

"Some of the football tonight was fantastic and we could have scored a lot of goals. In that way I'm satisfied.

"We didn't want a replay though and, in fairness, we dug in and defended the long throw-ins and the balls into the box.

"You cannot get any better than a home tie in the Cup. It doesn't matter who we play, at Old Trafford we have got a chance."

"We gave them a real run for their money.

"It makes you think when they can bring on players like Robin van Persie as well. When he was warming up I told him to sit down.

"We have to come back here in the league and will know a bit more about what to expect.

"We really wanted to put on a performance for our fans and we have done that. Now we can look forward to Saturday's game against Wigan."