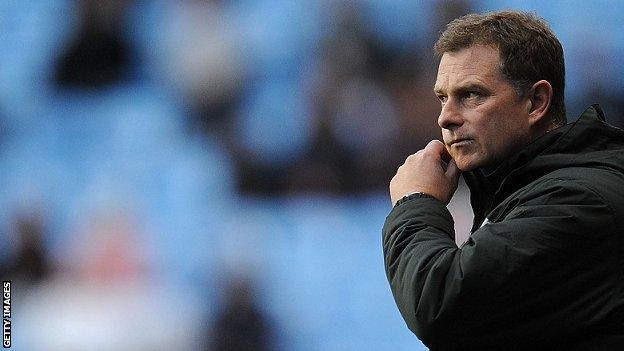 He moves to Huddersfield just five months after taking charge at then-struggling League One side Coventry City to succeed the sacked Andy Thorn.

Robins watched the Terriers win 2-1 at Leicester in their FA Cup fourth round replay on Tuesday night.

His first match in charge will be Sunday's fifth round tie at home to Premier League side Wigan Athletic.

Huddersfield Town chairman Dean Hoyle told the club website: "Obviously retaining our Championship status is vital, but we also needed a manager who buys into the club's football philosophy and structure. We believe Mark is that man.

"Mark has shown his skill in getting the most from the resources at his disposal, none more so than his recent achievements at Coventry; within five months he has pulled that side away from the League One relegation zone and given them a genuine chance of being involved in the promotion mix."

Sky Blues chief executive Tim Fisher expressed his frustration at Robins's departure, saying: "To say we are disappointed is an understatement. We gave Mark a three-year contract which we saw as a long-term appointment.

"Over the last few months we have had several clubs interested in securing Mark's services and we have fought off multiple approaches. We made every effort to ensure he stayed with us.

"I understand that our supporters will be angry and disappointed because they have seen a dramatic turnaround in on-pitch fortunes and performances in the short space of time that Mark has been here."

Robins will be joined at Huddersfield by his assistant at Coventry, Steve Taylor.

The former Leeds United boss led the Terriers to promotion from League One via the play-offs last season, after taking over from Lee Clark, who was sacked a year ago almost to the day.

The club currently lie 18th in the Championship, three points above the relegation zone.