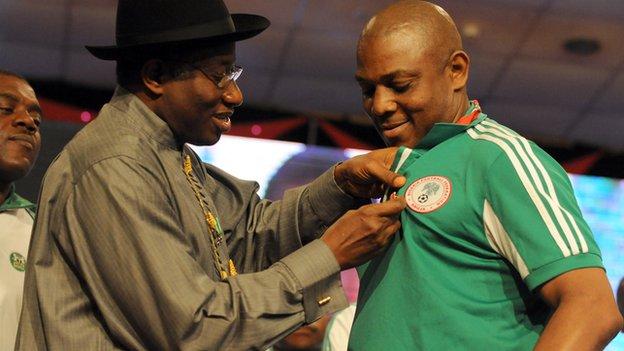 The Super Eagles lifted the trophy in South Africa on Sunday after beating Burkina Faso 1-0 in the final.

In addition, each team member received a plot of land from the Nigerian government.

Speaking at the event, President Jonathan said: "We thank you for making us proud, we gathered here to celebrate you our gallant Super Eagles.

"It was a well deserved victory, you deserved all the accolades and praise, your victory reminds us that dreams can actually come true.

"When we couldn't qualify for the 2012 edition of the competition, the general impression was that football had lost its battle. When you qualified for this edition, the majority didn't give you a chance but with determination, you won.

"We thank Keshi for a good job, you have my backing. The next target is for you to qualify for the World Cup in Brazil. You must not fail and we will support you to do well."

The president also emphasised that the government is determined to improve sport in the country.

Top industrialists in the country also donated another $2m to the team, according to the president.