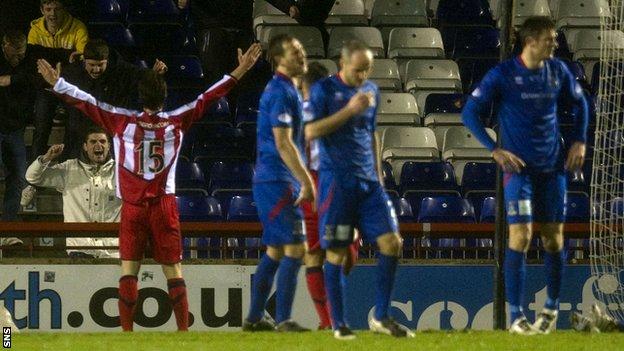 Borja Perez's 90th-minute equaliser snatched Killie a point in a game the home side dominated.

Some harsh words were said in there, a few things thrown

"If it was a boxing match it would've been stopped well before the end of the match," Butcher told BBC Scotland.

"I'm so bitterly disappointed that we've not picked up three points. I think they had one shot and scored from it. I can't believe we haven't won."

Butcher, who refused to discuss a late altercation with a supporter, added: "That's seven games this season where we've conceded late on - it's cost us 14 points.

"Some harsh words were said in there, a few things thrown, because at the end of the day that's unacceptable that we've thrown away 14 points in seven matches."

Nick Ross's third goal of the season from Aaron Doran's cross gave Inverness a deserved lead midway through the half.

From then on the home side peppered Kyle Letheren's goal, with Andrew Shinnie going very close on two occasions.

In the second half Caley Thistle also had a credible penalty claim turned down by referee Bobby Madden after Killie's Mo Sissoko barged Billy McKay.

And Butcher's men were made to pay for their profligacy in the 90th minute when Perez popped up to convert James Dayton's cut-back.

"We haven't done our jobs properly - one ball in the box gets partially cleared and, bang, it's a goal," Butcher said.

"You think of all the chances we've had in the game. We've not just had half-chances, we've had full blown really good chances and we haven't put them in the back of the net so we've only got ourselves to blame.

"We should be sitting now three points ahead but we're only one."

With the Inverness forward players failing to seal the victory, Butcher hoped his defenders would have kept a clean-sheet to ensure a narrow win.

"The back four should be saying 'we'll grind it out 1-0 and make sure we get the three points', but we can't even do that," he fumed.

"We should be out of sight and a long way ahead of where we are now."