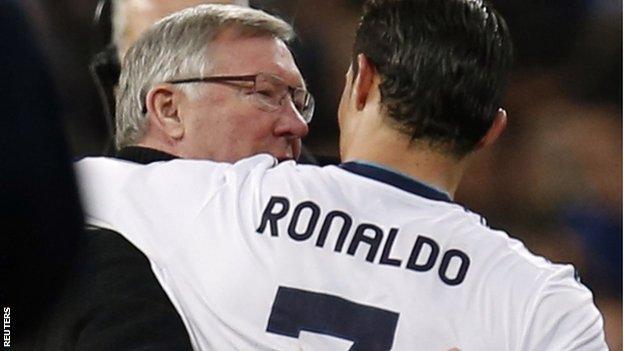 Danny Welbeck's headed opener was cancelled out by a prodigious leap by United old boy Cristiano Ronaldo as both goals were scored in the first half.

Both teams hit the woodwork, while Xabi Alonso was forced into a hurried clearance off the line after Robin van Persie had beaten Diego Lopez.

De Gea proves himself on return to Madrid

"I don't know if there are goalkeepers out there and available who are better than former Atletico Madrid man David De Gea.

"The save in the first half where he pushed the ball on to the post from Fabio Coentrao was world-class - and he produced another from the same player when he kicked off the line. His shot stopping was fantastic.

"When you look at England's best Joe Hart, who is three years older than De Gea at 25, and the mistakes he made in Manchester City's 3-1 defeat by Southampton last week, I think De Gea should be given time to develop.

"He has shown enough to suggest that he will be a very good keeper. He just needs to improve on high crosses."

Ferdinand the cornerstone of United's defence

"Manchester United defended the edge of the box well. They were getting numbers back and forcing Real Madrid wide, defending the width of the penalty area really well.

"Down the spine of the team, United were fantastic and Rio Ferdinand has been rolling back the years. He has been so calm and so cultured.

"He doesn't have the greatest of pace, but the way he and Jonny Evans defended the front post ensured Karim Benzema and his replacement Gonzalo Higuain didn't get a look in.

"We saw on numerous occasions Ferdinand's experience, and how he is being overlooked by England is beyond me.

"You have to say that on the evidence of Ferdinand's performance in Madrid that Nemanja Vidic may struggle to get back into Manchester United's defence."

United have a weakness down the flanks

"I think Sir Alex Ferguson has to look at right-back Rafael, who looked sloppy. He was giving away silly free-kicks in dangerous positions and struggled up against Ronaldo.

"Wayne Rooney, playing mainly on the right side, did not get back to give him much help, but Rafael needs to work harder.

"For the Real Madrid goal, Ronaldo pulled on to left-back Patrice Evra on the other side of the United defence.

"He knows he is stronger than Evra in the air and was preying on his weakness.

"It was very like the goal he scored in the Champions League final against Chelsea for Manchester United in 2008."

On a knife edge

"I think United will be favourites with the away goal behind them and a fantastic atmosphere at Old Trafford to come.

"Sir Alex Ferguson will be happy, but there will be part of him that is frustrated because they could have won it at the end."