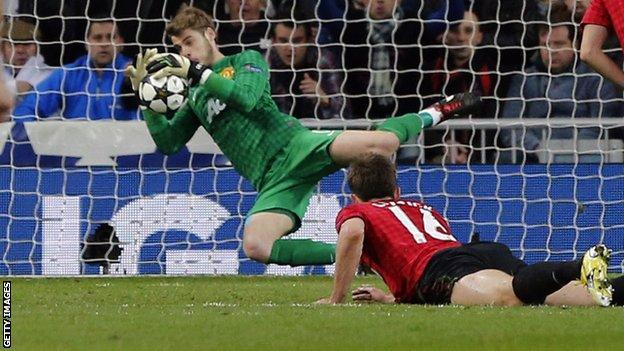 "I'm pleased for the boy. This is a difficult place to come and we would have taken 1-1 before the game."

De Gea was called into action in the first half as he tipped a low shot from Fabio Coentrao on to the post - a save that Ferguson called "absolutely superb".

The Spaniard denied Coentrao again after the break in unorthodox fashion, kicking the ball clear, and also made a number of solid stops from long-range efforts.

De Gea has frequently been criticised since joining United in 2011, with Ferguson defending him after the

The former Atletico Madrid keeper has often been rotated with Anders Lindegaard, but has started every Premier League game since the 4-3 win at Reading on 1 December.

Team-mate Ryan Giggs added: "It's good for him to come back to Madrid and put in such a good performance. He is a top keeper and his shot stopping is second to none.

"He is maturing all the time and he has showed that. He has come to Madrid with a lot of pressure on him, being from Atletico, and he has produced the goods."

Danny Welbeck gave United an early lead before a magnificent header from former United forward Cristiano Ronaldo left the last-16 tie delicately balanced ahead of the second leg at Old Trafford on 5 March.

Ferguson added: "Real's home record is outstanding. In the first half I was disappointed that we defended so deep to allow Real opportunities for shots and crosses.

"This was the meeting Mourinho described as "the match the world wants to see". The world would not have been disappointed after events in this wonderfully atmospheric arena - and the world will be only too happy to watch a second episode at Old Trafford in three weeks' time"

Ferguson suffered the pain of watching Ronaldo level matters for Madrid - but could not hide his admiration for the talent he nurtured so carefully at Old Trafford.

He said: "Cristiano had great years with us. I spoke to him. He is sitting in our dressing room, talking to the lads.

"I'm proud to see how he has flourished. I don't know how you describe a goal like that. I blamed Patrice Evra for not challenging him until I saw the replay. Then I felt a bit stupid.

"His kneecap is almost at the same height as Evra's head. It shows how high he climbed but I have seen it before when he played for us. His spring is unbelievable, as is the power in his header.

"I don't know if there is a player in the game who can do that. Certainly Lionel Messi couldn't do that."