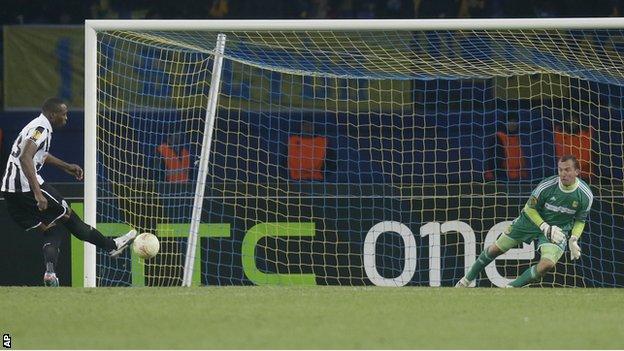 Shola Ameobi struck from the penalty spot to send Newcastle into the last 16 of the Europa League with the only goal of their tie against Metalist Kharkiv.

Papiss Cisse missed two good chances to give the Magpies a first-half lead.

Moussa Sissoko won the penalty when he was fouled by keeper Olexandr Goryainov after he pounced on a terrible backpass from Metalist defender Papa Gueye.

Tim Krul made great saves from Willian and Jonathan Cristaldo as the Ukrainian side tried but failed to recover.

Newcastle were unfortunate to go into the second leg all-square after a goalless draw at St James' Park.

Cisse twice had the ball in the net, only to be harshly denied by the assistant's flag, and missed two other good chances to earn an advantage.

Newcastle's victory was their first in Ukraine at the third attempt and their first win in Europe in six attempts.

And the Senegal striker was wasteful again in the first half in Kharkiv when he blew two opportunities to pinch a potentially crucial away goal.

And Cisse should have done better with his second chance two minutes before the break. He created the opportunity himself with a strong run before exchanging passes with Ameobi and hitting a strike that was parried away by the Metalist keeper.

But Newcastle were finally ahead in the 63rd minute when Sissoko quickly pounced on Gueye's errant backpass and was caught by keeper Goryainov, whose sliding challenge came marginally late.

Ameobi confidently sent the keeper the wrong way from the spot for his fourth goal of the season and his third in the Europa League.

Newcastle, who were missing tough-tackling midfielder Chieck Tiote through illness, and defender Steven Taylor - who was rested to the bench - had looked comfortable in a bitty, ill-tempered match.

But the goal seemed to free the home side as they finally stretched Alan Pardew's side in the final 20 minutes.

Krul was quickly off his line to deny Willian when the Metalist substitute tried to lift the ball over him.

And the Dutch keeper made two excellent saves to deny Cristaldo in the space of 20 seconds before being caught with a late challenge from the Argentine forward a few minutes later.

Newcastle defender James Perch then made a desperate block as Jaja tried to prod in an equaliser from six yards.

But the Magpies, whose 20-year-old defender Massadio Haidara made an impressive full debut, held firm to set up a last-16 clash with Russian side Anzhi Makhachkala.