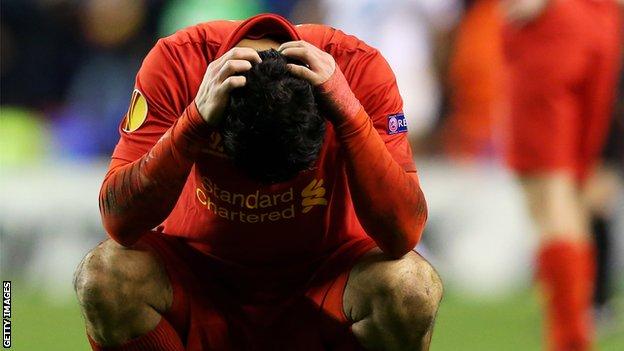 Liverpool are out of the Europa League after a second-leg comeback against Zenit St Petersburg fell just short.

A mistake from Jamie Carragher seemed to kill the last-32 meeting after Hulk latched onto his backpass for a vital away goal and a 3-0 lead.

But, roared on by the Anfield crowd, Luis Suarez slotted in a free-kick before Joe Allen prodded home.

Suarez struck a sensational second set-piece but Liverpool were unable to gain the crucial fourth goal they needed.

Liverpool's season at a glance

The odds were against manager Brendan Rodgers's side after a 2-0 defeat in Russia that owed much to some off-target finishing from Suarez and poor defending.

Their hopes were not helped by the absence of attacking duo Philippe Coutinho and Daniel Sturridge. The pair, who both scored in last weekend's 5-0 thrashing of Swansea, were cup-tied.

Despite the size of their task, the hosts fed off the lively atmosphere and began at a high tempo.

All the good work at the start came to nothing, however, when £32m Zenit striker Hulk scored what turned out to be the decisive goal in the tie after an error from veteran defender Carragher.

Hulk gratefully latched onto the 35-year-old former England international's miss-hit backpass and his accomplished finish past Pepe Reina befitted his status as a current Brazil international.

As Liverpool failed to score in the first leg at the Petrovsky Stadium, they now needed to find four unanswered goals to go through. Zenit had lost two of their previous three European games on English soil, but never by that margin.

Stung by that blow, Carragher's defensive partner Daniel Agger raced from his own half and was felled on the edge of the Zenit area after a crude challenge from Nicolas Lombaerts. After a long delay, Suarez wrestled back the momentum for Liverpool, scoring his 23rd goal in all competitions this season by finding a gap in a flimsy wall.

The big-spending Russian champions continued to look suspect against wave after wave of Liverpool attacks and Vyacheslav Malafeev was beaten again just before the break after Allen volleyed in a rebound from his own header after an excellent one-two between left-back Jose Enrique and the improving Jordan Henderson.

Urged on by the typically passionate support as they attacked the Kop end, Liverpool started quickly after the interval and demanded that referee Bjorn Kuipers point to the penalty spot after Tomas Hubocan appeared to clumsily handle the ball.

The Dutchman rejected those claims but Liverpool took matters into their own hands when Suarez rifled in another unstoppable free-kick that curled beautifully inside Malafeev's left-hand post.

In a frantic next few minutes, Steven Gerrard volleyed into the floor, substitute Jonjo Shelvey fired agonisingly into the side-netting and another Suarez dead ball was pushed to safety.

Liverpool's anthem 'You'll Never Walk Alone' rang around Anfield as the crowd tried to push their players on at the death, but another chance could not be crafted as Zenit - who will meet Swiss side FC Basel in the last 16 - held on to win.