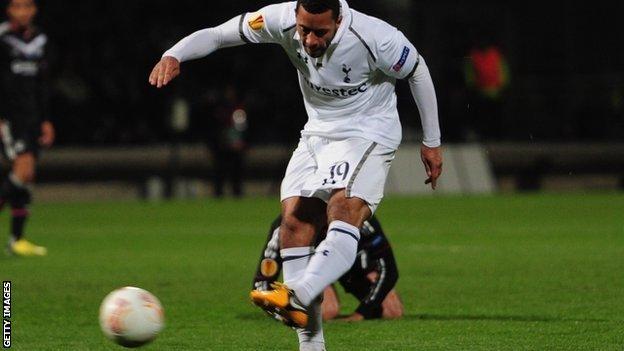 Spurs had been on the verge of being knocked out of the competition by Lyon courtesy of the away goals rule.

But in the 90th minute, Dembele skipped past Clement Grenier and struck low beyond the diving Remy Vercoutre.

Tottenham goalkeeper Hugo Lloris, watching from the substitutes' bench as Andre Villas-Boas maintained his preference of Brad Friedel in goal for European matches, said the game had a pre-match feel of a high-profile Champions League match.

There was certainly a giddy anticipation before the tie, mainly surrounding Gareth Bale - a player likened to Cristiano Ronaldo and Lionel Messi for his ability to influence games - but it was summer signing Dembele who provided an ending which was dramatic enough to grace the grandest of European stages.

As full time approached, Lyon's fans were somewhat prematurely celebrating their team's progress into the next round, but Tottenham's second-half dominance was eventually rewarded when Dembele unleashed his coup de grace.

Mousa Dembele's goal was Tottenham's first out of their last seven (in all competitions) not to come courtesy of Gareth Bale.

Going into the contest, Tottenham merely needed to defend the lead they gained at White Hart Lane, but even after three minutes - when the home team twice caused havoc in the Spurs defence - preventing Lyon from scoring seemed a task beyond the visitors.

The joyful Grenier, the only change to the Lyon team which lost last week in north London, added panache to the home attack.

The Frenchman's precise cross would have led to an opening goal in the 10th minute had Alexandre Lacazette managed to head the ball anywhere other than into Friedel's grateful hands.

Instead, it was Grenier's menacing free-kick nine minutes later which did the damage. It was a set-piece so precise that Gonalons barely needed to leave the turf to head the ball beyond the defending Bale, and the diving Friedel, at the near post.

Tottenham improved as half-time loomed, with Bale attempting to ignite his team by embarking on a 40-yard gallop down the right, turning Dejan Lovren this way and that until the covering Lacazette booted the ball out for a corner.

Lewis Holtby, making his first European start for Tottenham, nearly changed the balance of the tie with a low, long-range strike which bounced off the post but it was a subdued first-half performance from the Londoners.

Tottenham needed the likes of Emmanuel Adebayor and Aaron Lennon, as well as Bale, to spark into life after the break and that is what they did in a pulsating second half.

Adebayor, wide on the right, sent a looping cross towards Bale and the Welshman's attempted volley was inches from rippling the bottom corner of the net.

Twice, however, Friedel needed to come to his team's rescue. First, the American's legs blocked Grenier's toe-poke and then the goalkeeper dashed from his line to intimidate Lacazette. Lyon appealed for a penalty, but replays showed Friedel's protruding leg did not make contact with the off-balance Lyon striker.

Lyon goalkeeper Vercoutre punched away a goal-bound Bale corner and a swerving free-kick. Clint Dempsey should have levelled the match with a header 15 minutes before the end and as full-time neared, Tottenham's hopes seemed to fade. That is, until Dembele unleashed his magical strike.