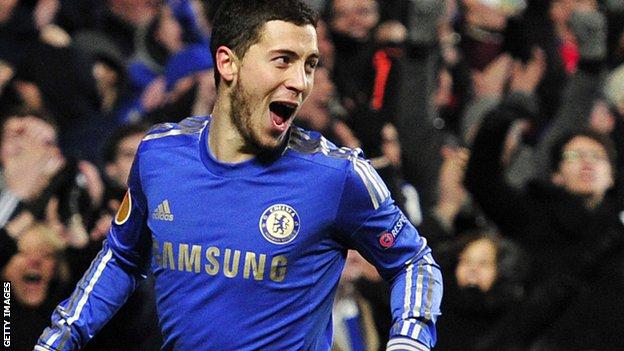 Eden Hazard struck in the second minute of stoppage time to send Chelsea through against Sparta Prague in the Europa League.

The substitute broke into the box and drilled an unstoppable shot past Tomas Vaclik to equalise on the night and preserve the Blues' one-goal advantage from the first leg.

The visitors had levelled the tie when David Lafata struck in the 17th minute.

Having seen the Blues secure a 1-0 advantage in the away leg, Chelsea fans might have hoped their side had done the hard part of securing their place in the last 16, where they will now face Steaua Bucharest after the Romanian side beat Ajax on penalties.

Not so happy hunting ground

It proved to be anything but the case for a side shorn of Frank Lampard and Branislav Ivanovic, as manager Rafael Benitez shuffled his pack before Sunday's Premier League clash with Manchester City.

Torres endured another night he would want to forget, missing two good chances before the Czech side took the lead. A side-footed shot after only four minutes shaped wide, and the Spaniard touched a Juan Mata cross over from inside the six-yard box as Chelsea began promisingly.

But a piece of quick thinking at a free-kick on 17 minutes levelled the tie and changed the atmosphere at Stamford Bridge. With Chelsea back-pedalling, the ball was moved rapidly to Vaclav Kadlec who eluded Cahill to pull the ball back to Lafata, who shot high into the net from eight yards out.

The goal stung Chelsea into greater urgency, but for all their possession they could not threaten the Sparta goal. Mata controlled a Ramires pass with great skill, flicking the ball over his head before sending in a bouncing shot that Vaclik did well to tip over.

Torres then completed a trio of first-half misses with a flying header over the bar after he had slipped in between two Sparta defenders.

Ramires struck the post with a deflected shot less than a minute into the second half, but Chelsea took inspiration for a while and stepped up the pressure. John Terry came close to an equaliser in unlikely fashion, forcing Vaclik into a save with a flick while facing away from goal at a free-kick.

But as the game wore on the visitors took heart from Chelsea's inability to turn pressure into chances. The Czech side were swift on the break, and Matejovsky went close after Terry was caught in possession in the Sparta half. Kadlec allowed a tense home crowd to breathe again when he shot wide with Lafata in space inside the Chelsea area.

The fans' tension seemed to transfer to the home side, and Sparta went close to taking the tie in the closing stages. Gary Cahill made a crucial block to stop a Kadlec shot, and as extra time loomed the Czech striker dragged another shot wide.

The missed chances proved to be crucial, though.

With less than a minute of injury time remaining, Hazard found enough space to move into the area and drill the ball past Vaclik.

Chelsea manager Rafa Benitez on striker Fernando Torres's record of only one goal in his last 14 appearances:

"He didn't play badly tonight, you can analyse a striker for the number of goals he scores. He did a great job for the team tonight.

"It's not easy against a team playing deep, but he was winning the ball in the air, bringing options for those around him.

"If he continues working like today and playing like he did today, he will score goals. I'm convinced about that."

"We played a great match.

"We came with a 1-0 deficit but we did the maximum to qualify. In the end we just didn't make it, but such is football.

"We were helped by the fans who were just amazing. It was a great trip for them to come to Stamford Bridge and we hope they enjoyed it."