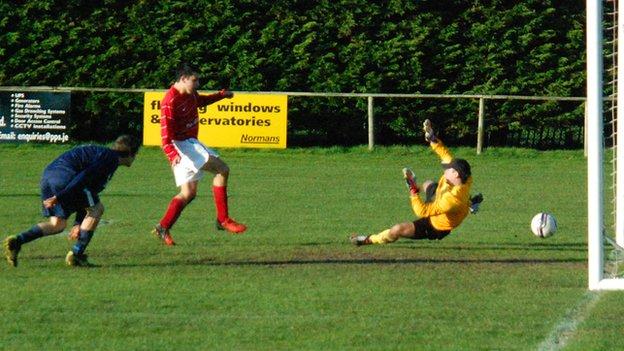 Jersey Scottish twice battled back from behind to win 3-2 at St Peter and move eight points clear at the top of the Premiership.

After a goalless first half a Pierce Cummins own goal put the hosts ahead but Charlie Petulla soon equalised.

Phil Kendall's strike gave St Peter the lead again but with five minutes to go striker Joe Murphy made it 2-2.

There was still time for the Scots to take all three points though with Petulla's second in stoppage time.

"Either team could've won this and I think probably a draw would've been a fair reflection.

"The effects of that result today will be massive for us in that dressing room. My heart is still thumping after that finish.

"It has really meant everything that three points. The league is effectively in our hands."

The win means the Scots extend their advantage over title-rivals St Paul's, who dropped to third after their clash against Grouville was postponed.

Jersey Wanderers climb to second after a 2-1 win at Rozel Rovers, in-form Jean Moubeke grabbing both goals for Wanderers either side of Ryan Le Cornu's penalty for Rovers.

In the day's other top-flight match, St Ouen finally clinched their first league win of the season, with Marco Viera's goal sealing a 1-0 win over St Brelade.