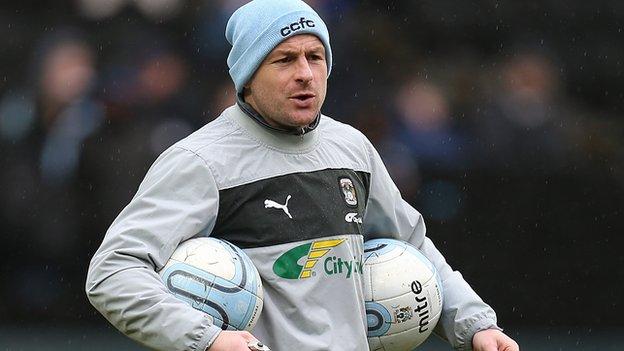 Coventry City have appointed Lee Carsley as caretaker manager in their first step to carrying on their battle for promotion from League One without Huddersfield Town-bound Mark Robins.

"There's a sense of continuity," said chief executive Tim Fisher. "Lee's been around the club a while. He knows the players, having worked alongside Mark.

"But we have already started the process of finding a new manager.

"We're not going to sit around and lick our wounds. We have to move forward."

I suspect that loyalty is not a word in his dictionary

Caretaker boss Carsley insists: "It's short-term. Literally, only I'm worried about the Bury game on Saturday.

"My ambition is to be a manager one day," he told BBC Coventry & Warwickshire. "But I'm not in a rush. I'm still learning things.

"I've gone down the route of managing and coaching at youth level, which is the usual route a lot of foreign coaches go down.

"I'm not one of these players who felt I could go straight into management. I wanted to learn my trade."

Whoever takes charge, Fisher remains insistent that, with Coventry sat promisingly in eighth place and just seven points off the play-offs, they still remain very much focused on promotion.

"People should be left in no doubt that we will continue with our pursuit of trying to get into the League One play-offs," he told BBC Coventry & Warwickshire.

"Let me make it clear that we did everything we could to keep hold of Mark Robins, but we will continue to move forward. The new manager will build on what we have done."

Who picks the Coventry team?

Coventry have clearly progressed as a club from the mess inherited by Robins when he took over on 19 September with the newly-relegated Sky Blues 23rd in League One, having failed to win any of their first seven matches.

Against a background of worrying off-field finances and a rent row which even briefly threatened their future at the Ricoh Arena, Robins has transformed Coventry's fortunes over the course of his 148-day reign.

But despite the cushion of an unspecified compensation package to be paid by Huddersfield, Robins' exit, along with his number two Steve Taylor, has still left a sour taste at Coventry.

"I'm frustrated, perplexed and disappointed," added Fisher. "We were building momentum and we've had the platform whipped from under our feet, so I'm not best pleased.

"Not two or three weeks ago, Mark came out and said he was Sky Blue through and through. But I suspect that loyalty is not a word in his dictionary.

"To say we are disappointed is an understatement. We gave Mark a three-year contract which we saw as a long-term appointment and he was able to bring in those members of staff that he requested, plus we gave considerable financial commitment in terms of players brought in during the loan window."