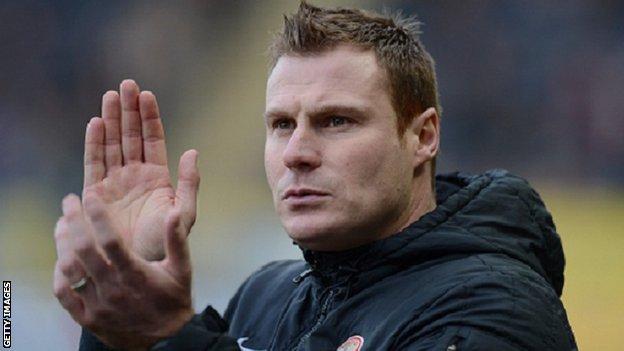 In-form Barnsley are a very different proposition as they approach Saturday's fifth round FA Cup tie against MK Dons, according to manager David Flitcroft.

The Tykes have been transformed since Flitcroft took over, winning six and drawing one of their last seven games.

"I've tried to change the dynamics, to give the players freshness, and we've got some momentum now."

Initially appointed on a caretaker basis after former boss Keith Hill was sacked, the 39-year-old Flitcroft has overseen a remarkable revival in the club's fortunes. One of the reasons, he believes, is involving the players in the planning for games.

Last Tuesday, the entire squad went to watch MK Dons' League One fixture at Doncaster Rovers, and followed that up with a classroom session the next day.

"The planning has been meticulous for this game," said Flitcroft. "The players have really bought into how we want to do things and the different learning experiences.

"It was interesting that watching the match emphasised for them how much they want to stay in the Championship.

"But the FA Cup is different. I've told the players it is about their families, about going home and they being proud of you. MK Dons have beaten Sheffield Wednesday and Queens Park Rangers, they're a force, and in this competition and being at home, they're probably not the underdogs."

Barnsley will be quietly confident, however. Flitcroft's introduction of a 3-5-2 system, and transfer window additions to his squad including former Ipswich forward Jason Scotland, have brought a new optimism to the South Yorkshire club.

"Saturday is an opportunity and you have to take opportunities in life," said Flitcroft. "I don't sleep a lot, because if I'm sleeping I'm not learning. The pressure in the league is very high, the games are massive, every one, and this is another hugely significant game."