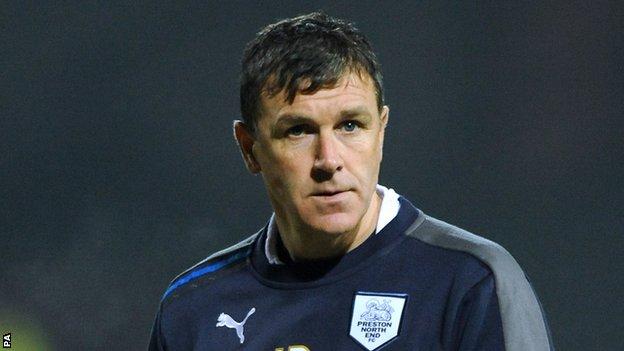 The 49-year-old, who was assistant to Westley, will take charge of team selection for Saturday's match against top-of-the-table Bournemouth.

The Lilywhites have also confirmed that first-team coach Dino Maamria has left the club with immediate effect.

"The club will now begin its process to find a permanent replacement for Graham Westley," a statement read.

"[We] will not make any further announcement until this process is complete."

Westley was sacked by the club after 13 months in charge on Wednesday, following a poor run of form which saw them only win one league match since November.

And BBC Sport's football pundit Mark Lawrenson, who began his playing career at Preston, believes that the former Stevenage boss did himself no favours with his behaviour during his time in charge.

"It's a really nice club and there's some really nice people there," the former Republic of Ireland international told BBC Radio Lancashire.

"But I was just baffled by some of his decisions and also some of his antics, especially on the touchline.

"I think we've had a spell of not being a particularly well-liked club.

"At this level one of the things you've got to do is get loan players in from the big teams and they can really seriously help you.

"I don't think anybody did us any favours with Graham Westley in charge I'm afraid."