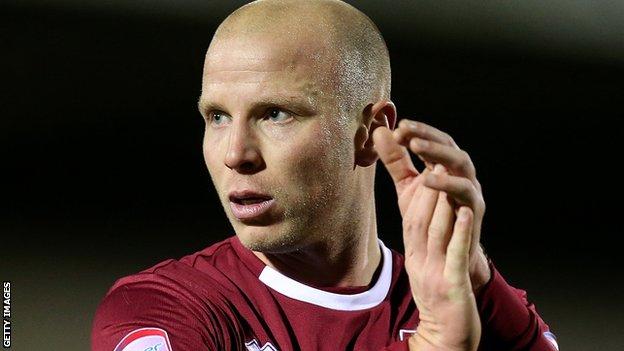 Luke Guttridge says he is "completely comfortable" at Northampton Town, and hopes the club can push for promotion.

The 30-year-old was released by the Cobblers in May 2010 and joined the Shots in July that year, but returned to Sixfields in January 2012.

"I don't think people realise what a good football club [Northampton] is," He told BBC Northampton.

"I found somewhere I'm completely comfortable and enjoy playing and I wouldn't change that for the world."

The former Cambridge United and Southend midfielder was named the Shots' Supporters' Player of the Season in 2010/11, scoring eight goals in 47 appearances.

"You work hard and do the best you can but if you're not enjoying something, it's hard to get the maximum out of yourself," Guttridge continued.

"When you're happy you play your best football."

Northampton lie eighth in League Two with 15 games remaining this season, and Guttridge admits that the team can do better.

"It'd be nice to get into the play-offs but we'll be aiming higher than that," he added.

"We feel like we're underachieving as a group of players anyway. We're disappointed with how the season's gone, knowing that if we could've got another two or three away wins, we'd probably be in the automatics."