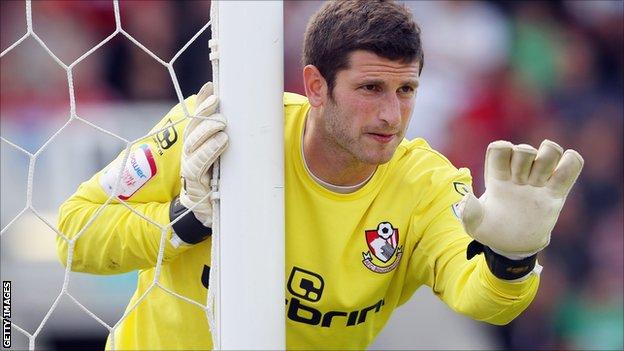 Bournemouth keeper Shwan Jalal has admitted he has suffered some dark moments this season but believes he is a better player as a result.

Jalal, 29, started the season as Bournemouth's number one before the arrival of veteran keeper David James.

But he won his first-team league place back for the trip to Hartlepool on 22 January and has remained there since.

"It's one of those set-backs that I had to take on the chin," Jalal told BBC Radio Solent.

The Baghdad-born keeper has been with the Cherries since 2008 and has made over 160 appearances for the club.

And he admits it was difficult to watch from the sidelines as the club embarked on an incredible run that has seen them climb from fourth bottom to the top of League One.

"As a number two goalkeeper it is a very lonely place," continued Jalal.

"You want to be that number one and the first name on the team sheet and [part of] the spine through the side.

"I am not going to lie, I had some dark days but it is how you come through at the other end. At the minute the shirt is mine and I am ever-so happy to have it and all my hard work and dedication is going into keeping that shirt and helping the team."

Jalal was promoted with the Cherries in 2010, and he admits the squad has the same feel about it, while paying tribute to manager Eddie Howe for the job he has done in turning around their season.

"I get the same feeling in terms of team spirit," he said.

"I was privileged to be part of a group of very special players.

"If you look at the characters in the squad at the minute you can see that the manager has moulded it in the way he wants, with the team spirit he wants, and everybody has signed up to that."

Jalal added: "It's no secret how highly the manager is thought of, not just in the changing room, but also in Bournemouth. He helped me bring my game on leaps and bounds.

"The place has a fantastic atmosphere and everybody is pulling in the same direction.

"He has gone away and come back and has set the standards higher and everybody is enjoying being a part of this."