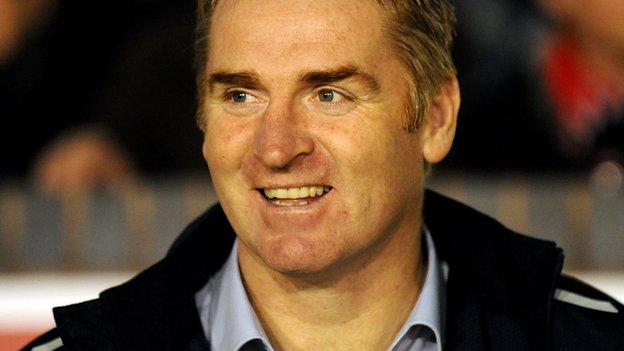 Walsall boss Dean Smith puts winning his first Manager of the Month award down to a team effort.

The in-form Saddlers' four wins out of five in January have earned Smith the award in League One - to mark the milestone of completing his second year in charge at Bescot.

"It's nice to get some recognition but it's the players who have been fantastic," Smith told BBC WM.

"This is for the whole club, the players and the staff," he added.

I've got a job to do here. I signed a new contract earlier in the season and we have a long-term objective

"I had a nomination back in September, but it's the first time I've been recognised with an award as a manager, so it's really pleasing. We've had a good couple of months."

Smith's award is all the more special having come in such a curious season of two peaks and a trough.

After starting the campaign with just three defeats in nine games to make the League One play-off zone, Smith's young side then fell away with a winless 16-match run.

They have now turned things round by winning eight of their last 10 games to climb back within seven points of the play-offs.

But, in a season when there has already been so much kneejerk managerial change at other clubs, Smith knows the debt of gratitude he owes to those who stuck by him at Walsall.

"There's not an awful lot of longevity in this job," he said. "Managers have been coming and going throughout the season.

"Thankfully, when we went through that period when we weren't winning, I had a lot of support behind me from the chairman, the board and the supporters.

"What you have got to do is to keep your head down, concentrate on your job and be as consistent as you can.

"Sometimes giving managers a bit more time can work. We came through it. And we've come out the other side looking a better team."

Such is the transformation in the Saddlers' fortunes that the popular Smith's efforts have even now had his name being linked with jobs at other clubs.

But the 41-year-old former Walsall, Hereford, Orient, Sheffield Wednesday and Port Vale centre-half insists: "I've got a job to do here.

"I signed a new contract earlier in the season and we have a long-term objective."