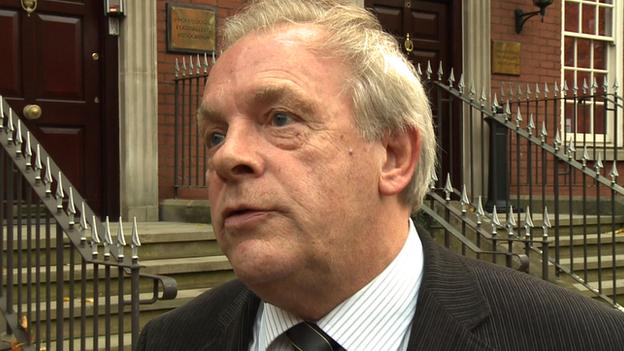 On Wednesday Portsmouth North MP Penny Mordaunt claimed in Parliament the PFA were "undermining the community buy-out of the club" and put the question to the Prime Minister David Cameron.

But Taylor says this is not the case and they support the PST's bid.

It's total fallacy to suggest we have undermined the PST's bid for Pompey. It is just not our job, we cannot decide who takes over a football club

"It's very frustrating when you hear those lies," Taylor told BBC Sport.

On Wednesday the High Court hearing to determine the future of Portsmouth Football Club was adjourned for a fourth time.

It is understood the adjournment was because the PFA were asking for clarity over a rival bid from Keith Harris, and in particular their stated aim of paying football creditors more promptly.

It led to Mordaunt asking the Prime Minister: "Does the Prime Minister take a dim view of people who say one thing and do another, such as purporting to support fan ownership of football clubs while undermining the community buy-out of Pompey, as the Professional Footballers' Association has done this week?"

But Taylor says the PFA have been caught up in the middle of a complicated situation and have ultimately been made scapegoats for the adjournment.

"I was upset to hear the comments of the MP in parliament," continued Taylor.

"My reaction was, 'what the devil is going on here?'. I thought it was really weird.

"We were asked to ring the Football League and seek more clarity as to why they had rejected the bid from Keith Harris, so we rang the league.

"It's total fallacy to suggest we have undermined the PST's bid for Pompey. It is just not our job, we cannot decide who takes over a football club so from that point of view it's particularly frustrating."

The hearing to determine the future of Pompey will now be heard on 21 February and Taylor says the PFA support the Trust's bid.

"We have no objection to the Trust because we know they will have the club's best interests at heart," he added.

"But I do have to make sure our players are protected, so we checked with the Football League. The administrators were looking to pass the blame to someone and we were a very convenient excuse.

"We have been portrayed in a false manner."

In response to Wednesday's developments, the leader of Portsmouth City Council Gerald Vernon-Jackson wrote to Taylor to thank the PFA for it's support in helping to resolve the ownership of the club.

"I note that the late expression of interest from Mr Harris has been dismissed by the PFA," said Vernon-Jackson in his letter.

"It seems to me that it is clear that the Pompey Supporters' Trust offer is the only long-term plan realistically available to make our football club sustainable for years to come.

"As you are aware, Portsmouth City Council has resolved to make a loan available to the Trust to assist their bid to take over the club, and the City Council is working hard to enable this to occur.

"My thanks again for the support that the PFA are giving to get the ownership of the club resolved and the club brought out of administration."