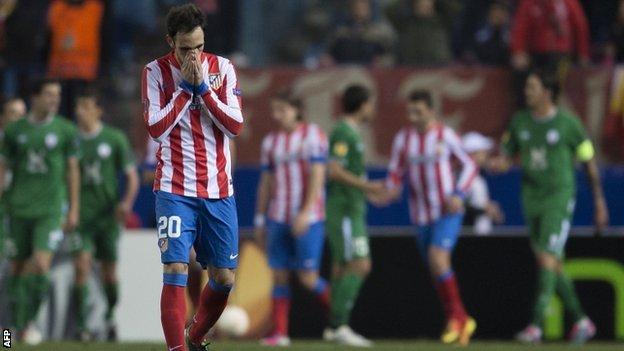 Reigning champions Atletico Madrid are in danger of going out of the Europa League after they were beaten 2-0 at home by Rubin Kazan.

The Russian side were ahead after only six minutes, through Gokdeniz Kardeniz, before adding a second in injury time.

Pablo Orbaiz secured the win for Rubin, who played 45 minutes with 10 men after having Roman Sharanov sent off.

In Germany, Borussia Moenchengladbach and Lazio drew 3-3, with three goals inside the last six minutes.

A penalty from Martin Stranzl gave the home side the lead before two goals in seven second-half minutes from Sergio Floccari and Libor Kozak gave the Italians the lead.

They were reduced to 10 men with 21 minutes remaining and Moenchengladbach took advantage. First Thorben Marx equalised from the penalty spot before Juan Arango gave the home side the lead with two minutes to go but there was still time for Kozak to score again to secure the draw.

Anzhi Makhachkala and Viktoria Plzen, who both started their Europa League campaigns at the second qualifying stage, gave themselves excellent chances to progress to the last 16.

Anzhi came from a goal down, at home, to beat Hannover 3-1 thanks to goals from Samuel Eto'o, Odil Ahmedov and Mbark Boussoufa.