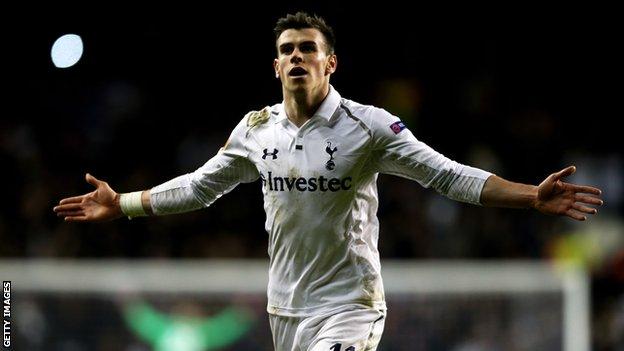 Tottenham manager Andre Villas-Boas says he has been stunned by Gareth Bale's "incredible" free-kick technique after the winger's double against Lyon.

Bale, 23, followed up his goal in Saturday's win against Newcastle with two more set-piece strikes in the 2-1 Europa League home-leg victory.

"Incredible," Villas-Boas said. "Not only his all-round game but the ability he has to strike these free-kicks.

"The ball gains power when he strikes it and it changes direction easily."

Bale excelled in the Europa League round of 32 first-leg meeting with Lyon as he first found the back of the net with a swerving 35-yard effort before powering home the winner from a dead ball deep into injury-time.

Bale's brace of free-kicks took him to 17 goals in all competitions this season, with four of his last six strikes coming from distance

He has now scored his club's last six goals in all competitions, with four of them coming from distance. The Welsh winger attributes this run of form to the hours spent on the training pitch honing his technique.

"I've been practising free-kicks on the training ground and I scored one like that last week," the Welsh winger said.

Spurs travel to France for the return match on Thursday and Bale hopes his brace will prove crucial.

"But the most important thing is we got the win, it's going to be hard going over there, but we're taking this competition seriously."