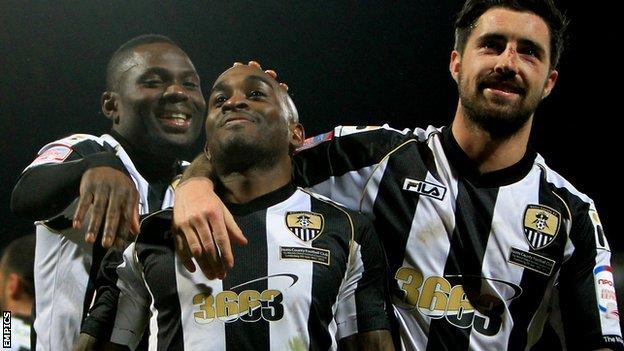 Chris Kiwomya claimed his first win as Notts County's caretaker manager as his side came from behind to beat Bury.

Bury, who were placed under a transfer embargo earlier on Friday, have now won only once in 16 games in all competitions and remain 22nd, six points adrift of League One safety.

The Magpies sacked Keith Curle earlier this month and Kiwomya had drawn two and lost one of his previous three games as caretaker manager.

His side made a poor start against Bury as a loose defensive pass gave the ball to Schumacher, who ran unchallenged before shooting past Bartosz Bialkowski to give the visitors a 24th-minute lead.

However, Notts fought back after the break, with Kelly levelling when he controlled Cofie's pass, cut inside defender Nicky Ajose and fired a shot into the net, although it did take a deflection off Joe Skarz.

Zoko put the hosts ahead when defender Eastham misjudged a bouncing ball and that enabled the Ivorian to shoot into the bottom corner.

Eastham, who spent time on loan at Meadow Lane earlier in the season, was again to blame for Notts' third goal. His poor header was intercepted by Zoko, who beat the on-rushing Trevor Carson to the ball before tapping into an empty net.

Campbell-Ryce's penalty clinched the win that takes his side up to ninth, eight points off a play-off place.