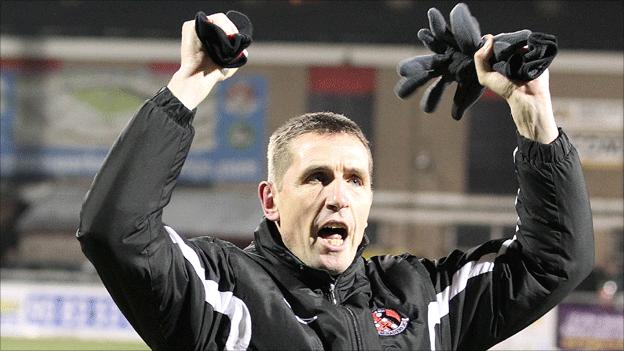 Crusaders manager Stephen Baxter has agreed a contract extension which will see him remain at the Seaview club until May 2016.

Baxter's current contract had been due to end next year.

The news will come as a major boost to the Crues ahead of Saturday's crucial Premiership derby against north Belfast rivals and league leaders Cliftonville.

On a day of derby games, Glentoran play Linfield at the Oval and Ballymena United entertain Coleraine.

Crusaders chairman Stephen Bell expressed his delight that Baxter had agreed to extend his stay at the club.

Michael Clarke is joined by Bobby Carlisle for the game between Glentoran and Linfield at the Oval.

The programme, which begins at 14:00 GMT, will also feature reports from the day's other four games.

"It is an absolutely cracking signing for us - Stephen has built this football club up piece by piece since were were relegated in 2005," he told the club's website.

The second-placed Crues go into their match without suspended trio Gareth McKeown, Paul Heatley and Declan Caddell as they attempt to close the 12-point gap on Cliftonville.

Baxter's side will again be without Gary McCutcheon, who remains out with a hamstring injury, but Reds boss Tommy Breslin reports no fresh injury worries.

"This is probably the biggest game of the season for both clubs," said Baxter.

"If we win we can hold onto their coat-tails while a victory for them would put them in a fairly unassailable position," he added.

Ballymena will still be without banned winger David Cushley as they aim to exact revenge for last week's Irish Cup defeat at the hands of the Bannsiders.

The Sky Blues are now without a win in their last 12 meetings with Coleraine, a run stretching back to October 2009.

"We are starting to get players fit again and we have had a couple of good results but we have a lot of young players in our ranks and their aim must be to be consistent," said Patterson.