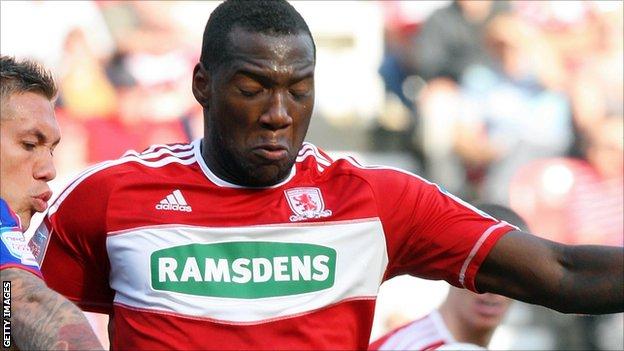 Middlesbrough striker Ishmael Miller has said he was relieved to be back in first-team action after his return against Leeds United in midweek.

Miller, 25, currently on loan at the Riverside from Nottingham Forest, helped continue Boro's play-off push with the assist for Curtis Main's goal.

He was out with an ankle injury picked up in December's defeat by Watford.

"It's good to be back playing, I feel good. You want to be out there to help your team-mates," Miller told BBC Tees.

Tuesday's 1-0 victory ended a five-game losing run in the Championship, and a long running home hoodoo against the Yorkshire club stretching back to the inaugural year of the Premier League.

"We've had a great team spirit this year, but things weren't going our way," Miller continued. "Playing well but we didn't pick up the results we deserved.

"It was good to put that right on Tuesday - the manager said we hadn't beaten Leeds for 20 years so it put pressure on and it was great to get the three points."