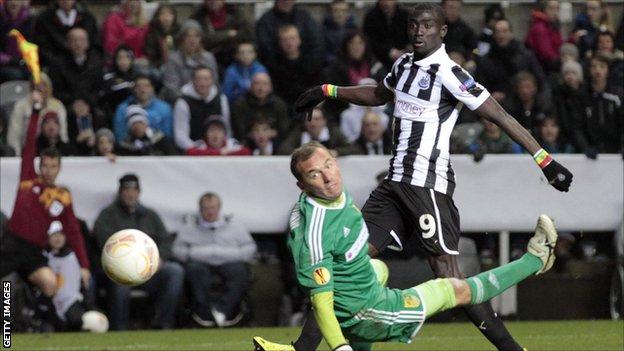 Boss Alan Pardew says Newcastle United were unfortunate not to come away with a first-leg lead from Thursday's Europa League 0-0 draw with Metalist Kharkiv.

The Magpies had two goals by Senegal striker Papiss Cisse disallowed to leave the tie finely poised for the return in Kharkiv next week.

"When you see the two replays, it really does hurt."

When you see the two replays, it really does hurt

Pardew added: "I'm incensed a little bit because of those couple of decisions that didn't go our way."

Newcastle's stalemate ended a run of 14 European home ties in which they had scored a goal, although shutting out a side that has failed to score in just three of nine games pleased Pardew in contrast.

"We have played as well as we could have against that team," he continued. "Mapou [Yanga-Mbiwa] had to wrap Willian up, who I know from old is a fantastic player.

"We had a big chance at the end when the keeper has made a magnificent save from Papiss again, and it's been a frustrating night for him.

"He's put the ball in the net twice and both are disallowed which is the kind of luck he's having, but I'm really pleased with the team.

"The subs made a difference and when you have that level of performance you expect to win and we deserved to."