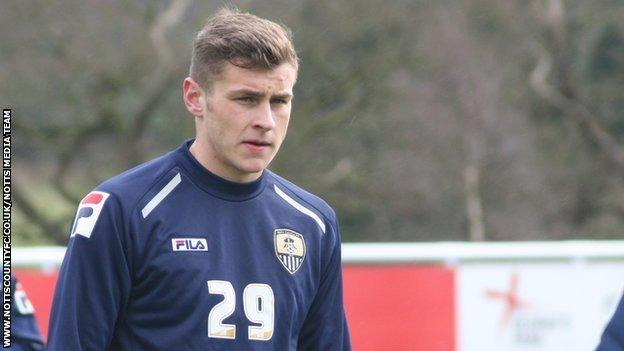 Notts County striker Jacob Blyth says his leap from non-league football to Leicester City has been ideal preparation for League One action.

The 20-year-old moved to the King Power Stadium from Southern League Premier Division side Leamington in the summer.

But he is yet to play a first-team game for the Foxes and joined the Magpies on a one-month loan deal this week.

"I've had the non-league aspect of my game and now I've got the tippy-tappy passing side as well," Blyth said.

"I went straight into first-team men's football at the age of 15 and it has given me the tougher, physical side of the game.

"You hear of all these people being in academies from the age of 10 and then are released by the time they are 16 or 17 but I've never been at an academy.

"Arguably all I've ever needed was the quick, sharp, fast-paced football and I've got that at the development squad at Leicester this season."

Blyth had a short loan spell at Burton Albion earlier this season, but just 18 month ago he was playing football part-time and working in the accounts department of a hardware store.

Now he is preparing to play in England's third tier.

"It has been an absolute roller coaster and thankfully, at the minute, it has just been going up," Blyth said.

"Coming down to Notts is going to be a great experience for me and will improve me as a player."