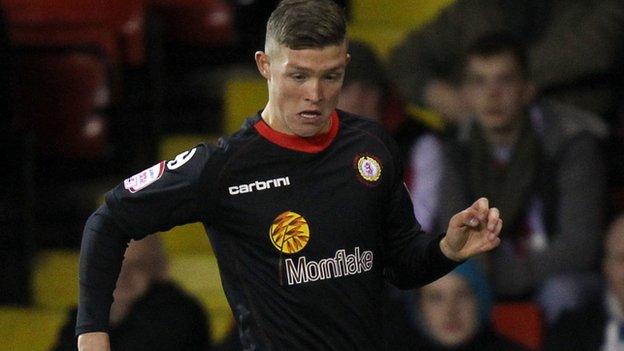 Crewe Alexandra are keen to tie up teenage striker Max Clayton's future before he enters the final year of his current contract.

The 18-year-old Crewe Academy product is contracted to remain at Gresty Road until June 2014.

And Alex boss Steve Davis admits: "We'll have to sit down and talk. I don't want a situation where his contract is coming to an end.

"Maybe that's something for the summer," he told BBC Radio Stoke.

"He's still got another year left to the end of next season.

"We spoke to Max and his dad several months ago in an attempt to do something. At that time he didn't want to."

He's just come back into the team and is starting to show a bit of form. He's getting close to what we had from him at the end of last season

After making his debut as a 16-year-old substitute two seasons ago, Clayton scored three league goals last term in 24 appearances, all but one of which came via the bench.

He also scored the only goal of the game in the Johnstone's Paint Trophy win over Macclesfield in October, his first goal for the club, as well as Crewe's tie-clinching goal in the League Two play-off semi-final second-leg win at Southend.

He has again hit five goals in all competitions this season, but has not netted in the league since hitting the winner against Coventry City at Gresty Road on 1 September.

He has lost his place since the return to fitness of AJ Leitch-Smith, and of Mathias Pogba from Africa Cup of Nations duty.

But, having already twice hit winning goals in the JPT this season, Clayton will be expected to play a part in Wednesday night's northern area final second leg against Coventry - the Alex's next fixture.

"He's still buzzing and ready to come into the team if we need him," added Davis, who knows he also has to talk to Leitch-Smith this summer.

"AJ is another one with a year left," said Davis. "But we can do that at the end of the season. We don't have to panic about him

"He's just come back into the team and is starting to show a bit of form. He's getting close to what we had from him at the end of last season."